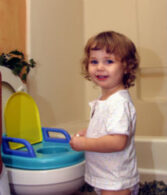 Yes, you heard me correctly! I know the words “joy” and “potty training” don’t usually go together. However, throughout the last few weeks the experience has been incredibly rewarding and joyful (most of the time).

Now, before you think I am just going to be up on my high horse and discount any of the struggles that can go along with potty training, let me give you some of the not-so-fun background from this past year. Shortly after he turned two, many of Johnny’s friends were starting their potty training, and it seemed he was also starting to show signs of readiness, and I was terrified! I had no idea how to begin the process and I had had no intention of even exploring the potty-training idea that early, but I wanted to honor his willingness and so we jumped in.

I remember feeling a lot of external pressure because there was a popular book circulating in my moms groups that made me fearful that the longer I waited the harder it would be, and that I would somehow “mess it all up”.  I’m very in tune with my son and so I knew better than to think he would “fit into the box”, but I still felt myself being pressured and comparing my kid to other people’s experiences.

Despite my internal struggle, I pretended to be ready, and we had great success for a month… until we didn’t. Then came a few weeks of many accidents, extra stress, power struggles, and me trying to force something that he clearly was not ready for. I wondered if this went beyond the usual potty-training regression which can happen from time to time. Yet I still found myself wanting to push to make it happen due to the fear that I would somehow ruin the process or confuse him if I stopped and picked it up later.

I will never forget what my sister-in-law, Dr. Bob’s wife, told me, “Erin, it is ok to try again later.”
I didn’t have a crystal ball and I had no way of knowing if it was going to be easier or harder down the road, but I did know this: the stress it was causing in our relationship was not worth it. So, we happily went back to diapers for the next 8 months. After he turned three, we returned to the great endeavor. But this time, armed with a little more confidence on my part, a little more maturity on his part, and an overall stronger bond between us, we knew we were both ready.

How We Learned to Find the Joy (and Success!) in Potty Training

I’m happy to say that, this second time around, he took to it right away and we are now two months in! Of course there have been accidents, but these were far outweighed by pride and joy (his and mine!) that came as we progressed and his enthusiasm increased. It’s like we trust each other completely and he knows this is safe. And of course, the MOST important lesson for me has been, as Dr. Bill so often wisely says, “Get behind the eyes of your child.”

Be sure to check out our section on Toilet Training for more tips.