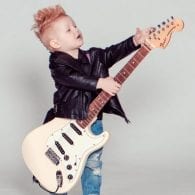 The Benefits of Your Child Learning to Play an Instrument

We are a very musical family. I remember playing two leading roles in musicals when I was a kid: Tom Sawyer (I can still sing to myself “Well, it ain’t every day a boy gets a chance to splash white warsh on a big board fence . . . and that lucky boy is me!” – I also remember getting to kiss Becky Thatcher on the cheek – that was gross) and Barnum (jumping rope on a balance beam was my trick). Two of my sisters have the most beautiful singing voices in the family – they were vocal majors in college. My brother Jim does a fantastic Elvis Pharaoh in Joseph, and my little brother, Matt, played a lead role in The Music Man in high school – how he managed that tricky opening number on the train is beyond me. But it wasn’t all just singing – I started learning to play an instrument with the dreaded piano lessons.

Remember how much we hated being forced to learn to play an instrument when we were kids? Plus, this was the old days – momma didn’t drive me to my lessons in an SUV and sit and listen in adoration while I played. I actually had to ride my bike – Ya! Ride my bike – unattended, about five miles every week to my lessons. The only saving graces were that it wasn’t uphill (either way) and it didn’t snow on the South Carolina coast. But I don’t remember liking it. In fact, I remember we were playing football one day at a friend’s house, and the friend’s mom stopped the game to announce my mom was on the phone reminding me it’s time to ride over to my lessons. You’d think that I would be scarred by that, but I actually love mountain biking now.

Music is Good for The Brain

But, just like those green veggies, piano lessons were good for me, according to a new study. Researchers at the University of Vermont School of Medicine studied MRI scans on 232 kids and found that the brain areas responsible for motor planning, coordination, visuospacial ability, emotion and impulse regulation matured more quickly in children who learned to play an instrument (specific instruments not reported).

So, I guess I can be thankful that my mom forced me to go. If you haven’t started your young kids on learning to play an instrument yet, maybe it’s time. I don’t know the best age to start, but four or five should be good. If your child complains, tell him it’s to develop his visuospacial ability. If he can’t say “visuospacial ability,” then it’s definitely time to hit the keys.