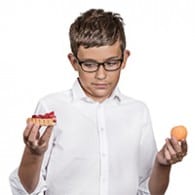 Teaching Kids How to Choose Snacks instead of Treats

A few afternoons ago, our 9 year-old was pretty hungry after getting home from school. I suggested she go to kitchen to get a snack as I continued the project I was working on. A little while later, I wandered through the kitchen to find her frustrated with an empty ice cream bowl on the counter and a bag of chips in her hand. “Ugh! I’ve had ice cream and chips, and I’m still hungry!” she said. I looked at what she had been eating and a new nutritional concept suddenly hit me!

I said to my daughter, “Looks like you’ve been having some nice treats, but how ’bout we try making some snacks?” She gave me that smart look that only a 9 year-old going on 17 can give that said, “What the heck are you talking about? And what the heck is the difference?” Since I was just now making this up in my head, I wasn’t quite sure myself but I just went with it, telling her, “Treats taste really good, but usually make you MORE hungry instead of filling you up. But snacks taste good AND they fill you up.”

We then made one of her favorites, peanut butter on toast.

It’s funny how, after 15 years of giving nutritional lectures to families and moms groups, I still learn new stuff from my own kids and patients every day. I’m willing to bet that almost all of you have experienced this same issue: you’re hungry for a little snack and you go to the pantry and maybe grab a bag of chips. They taste really good and you just keep munching and munching, but you seem to get hungrier with every bite! Soon the whole bag is gone…and you’re still feeling hungry.

This is a phenomenon I noticed in myself several years ago when I was in the middle of my own weight loss journey. What made a big difference for me was that I also discovered how to beat it; EAT SNACKS THAT FILL YOU UP! I know that sounds a bit simple, because it is…which makes it easy for anyone to make this change.

My Family Snack vs. Treat Experiment

I did an experiment on myself while on a family vacation. One afternoon, I ventured into the kitchen of the rental house that we were staying in, looking for a snack. Since it was vacation, there was a package of cookies in the pantry, and they looked really good! I grabbed one and started eating it while I walked out of the kitchen. I had barely entered the next room when my brain started growling for more, so I turned around and headed for the pantry while I finished my first cookie. With another cookie in hand, I made my way toward the backyard to rejoin the family games, but instead found myself headed back to the pantry to grab a third and fourth cookie. Four cookies, over 200 calories, and I was still craving more!

The next afternoon I tried something different. Instead of grabbing a cookie when I was hungry, I grabbed a small tangerine from the bag on the kitchen counter. One of my kids was with me and I gave her one too, so we played the game of “try to peel it in one piece.” We ate the flavorful bits as we headed into the backyard and a few minutes later it hit me that I was no longer hungry. I only had about 35 calories-worth of tangerine, yet I was not hungry, and I felt way more energetic than I had after having all those cookies the day before.

Why Snacks Are Better Than Treats

When you eat a treat like a cookie, potato chips, or ice cream, the strong, artificial flavors and the mouth feel – or the salt/sugar fix that overstimulates the pleasure centers in your brain – makes your body say, “Wow, that was good. I want MORE!” Those signals are so strong that they override signals coming from your stomach saying, “I’m getting full” or “Yuck, that’s not agreeing with me.” All your brain hears is, “I WANT MORE,” so you eat more.

When you eat a SNACK like a tangerine, an apple or nut butter on toast, all the signals between the stomach and your brain are more balanced, and you get both the “tastes good” signals as well as the “getting full” signals.

Note: this is a very simplified explanation of the biochemistry of hunger signals, but I think it makes it easier to understand.

How My Family Applies This in Our Home

We think of TREATS as things we have at birthday parties, baseball games or movies. We don’t keep them regularly stocked in our pantry.  Cookies, chips, cheese puffs, etc, are not part of the regular shopping list.  Sure, we will occasionally get them as a treat, but I want to avoid the expectation that those things should be in constant supply (like cow milk, eggs, or bread).  The moment I hear, “Hey dad, we’re out of Doritos!” is the moment I know we’ve been buying them too much.

When we get hungry between meals, we go for a snack, not a treat. Even when there are chips or cookies in the pantry, I insist the kids eat the apple first, then they can have some chips. Many times, the apple gets half-eaten and they forget about the chips, or if they do get to the chips, they eat far less of them. I’ve noticed that after a few weeks of this, the kids (and parents) start craving the good stuff when they get hungry.

If I ever do go for the treat first, I just keep in mind that those “still hungry” signals are not real. Also, I’ll often get outside BEFORE I start eating the cookie. That helps me fight the temptation to go back for another one or two…or three.  I grab a cookie or two, or a handful of chips, then close and put away the bag, then go eat them somewhere other than the kitchen.  If I stand there in the kitchen eating out of the bag, then I never stop!

I’ve also found that when the kids have been treating themselves to strong flavors like Doritos all afternoon, almost anything we have prepared for dinner doesn’t sound good to them because the hunger and pleasure centers in their brains have been bombarded with artificial flavors.

A time I always get the urge to munch on chips is the night before an episode of The Doctors when I sit and read guest information for an hour or two.  I have to admit that after eight years on the show, it has become quite the irresistible craving.  The moment I sit to study, my mouth starts watering for something crunchy and salty!  Luckily, I found that a cup of walnuts have been the answer for me.  They do a great job of satisfying the “need” for crunch, and the flavor is so strong that it totally eliminates any other cravings, and I don’t even like walnuts that much!  Speaking of The Doctors, here’s a fun video clip from the show talking about snacks.

What healthier kid-approved snacks have worked in your home?