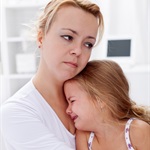 A realistic fact of family life is that children can push our frustration buttons.  We like to divide temper tantrums into two categories.  The first category is manipulation temper tantrums. This is where a child uses obnoxious behavior in hopes of getting his way.  The second category is frustration temper tantrums.  This is when a child gets frustrated trying to put on her shoe, throws the shoe against the wall, and screams.  Or sometimes the child works himself into a snit and blurts out, “I hate you Mommy…”  Here’s some temper tantrum-taming tips we learned with our own children and from parents in our practice:

Let your child know right away that you don’t listen to temper tantrum-speak.  When he yells or screams, simply say, “Give Mommy your nice voice…”  or go into another room while saying, “When you can talk to Mommy in your nice voice, then we’ll play…”  Once children realize that their temper tantrums get them nowhere, this behavior will self-destruct.

When the little volcano erupts, instead of letting your child push your anger buttons and blowing off steam yourself, immediately ask yourself, “If I were (name) how would I want my mother/father to act?”  It’s amazing how this sensitivity tool will prompt you to nearly always make an appropriate response.  That’s because your child who is out of control needs you to respond like an adult who is in control.

If your child’s temper tantrums occur in a public place, such as a supermarket, simply take him out to the car to listen to soothing music and your calming words until he settles.  Again, he’s getting two messages: temper tantrums get him nowhere and, secondly, you will help him through it.  One of our toddlers went through a screaming and yelling stage.  We responded with, “Only scream on the grass.”  When he started to scream, we took him outside and let him scream it out. That stage soon passed.

Turn a problem into an opportunity

Approach temper tantrums as an opportunity to connect with your child.  In this way, the child learns that you are a valuable resource to help him out of his mess.  This sets the stage for trusted communication later when the stakes are higher than a temporary temper tantrum.

Once your child gets more verbal and can express his needs and frustrations more in words rather than actions, this behavior will soon pass.