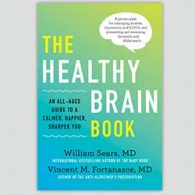 Endnotes from The Healthy Brain Book

Page 42:  Omega 3s build brighter brains – at all ages.  In our review of scientific studies there seems to be more proof about how sufficient omega-3 fats in the diet increase brain volume and smartness – at all ages – than we could find for any other nutrient.  Here’s our summary of the research:

These studies make sense since around eight percent of the dry weight of the brain is composed of omega-3 fats.  O’Brien, J.S., et al.  “Lipid composition of the normal human brain: grey matter; white matter; myelin.”  Journal of Lipid Research 1965; 6:537-44.

Page 45:  Measuring omega blood levels.  Using the Vital Omega-3/6 HUFA Test from VitalChoice.com, Over the past seven years we have measured omega levels in over seventy patients and found that generally the omega-3 blood levels do accurately reflect the amount of seafood the person eats.  We have found this measurement particularly useful to convince confirmed vegans to eat more omega 3s from a seafood source as a supplement.  The vegan source (i.e. algae oil) source for omega 3s we recommend in our medical practice is the Omega Blend from Juice Plus.

We have found that measuring the omega levels opens a “show-and-tell” door so that when we show our patient that their omega-3 levels are insufficient and/or their omegas are out of balance. That visual image motivates them to take the right omega-3 supplements and/or eat more omega-3-rich safe seafood. Then we re-measure their omega levels six to eight weeks after improving their diet to be sure it gets up to at least eight percent, and has a healthy omega-6/omega-3 balance of less than 3:1.   Using this scientific approach truly motivates persons to eat more omega 3s and/or take more omega-3 supplements.

Also, check with your healthcare provider as the omega-3 red blood cell index is now offered by some commercial laboratories and should be included as part of your metabolic panel during routine blood testing.

Page 57:  MCT oil.  Sixty percent of coconut oil is MCT.  MCT oil is extracted from palm kernel oil.  MCTs really are like a ketogenic diet in that MCTs gets converted in the liver to ketones, which is used as brain fuel, or used immediately as energy instead of being converted to fat.  MCT is a saturated fat.  So, when you add good fat to your diet you have to subtract bad stuff or you will get fat.  MCT oil is converted to ketones.  The brain likes ketones as an alternative fuel source.  USDA website for food composition/coconut oil.  The ketone levels of coconut oil peak around three hours after you eat it. Use medium heat or less than 350 degrees, otherwise it changes the fat.  You don’t want it to smoke when you heat it.  Put coconut oil on salmon or on the veggies as you put them in the oven.  It melts at 76 degrees.   Shelf-life of two years at room temperature.  Eggs absorb the oil.  MCT oil is odorless and tasteless, so you can use as a salad dressing.  Be sure to start low and slow when starting anything new so you don’t get GI upsets.  Start with one teaspoon and take with food.  Increase every two or three days until you reach around two tablespoons, or 35 ml, of coconut oil per day.  MCT oil is a good substitute fat because you burn it instead of store it.  The mitochondria in the muscles use MCT oil to convert to ATP.  Goat milk is higher in MCT than cow milk.  Feta cheese contains MCT oil.

Page 60:  Omega-3 content of safe and popular seafood.  See the link for VitalChoice.com.  You will notice that wild Pacific king salmon is our top delicious and nutritious choice.

Aspartame.  In 1969 James Schlatter, a biochemist working with the compound called aspartame as a possible cure for stomach ulcers, happened to lick his thumb while turning a page in his notebook. He was struck by the intense sweetness of the chemical that had inadvertently covered his thumb.  This discovery led to a company called NutraSweet.

Aspartame, and some of the other artificial sweeteners, was discovered by “accident” in a chemistry lab.  Do you really want to feed your brain an accident?

ASP, as we’ll shorten it, has had a sour history for the past 25 years.  If you searched the science you would really be confused.  Most articles touting its safety are the victim of what is called “selective literature review,” meaning you start with your bias (e.g. “ASP is safe”) and select the journal articles that support your bias.  To satisfy my curiosity, I examined a 2008 scientific review, called a meta-analysis, of 160 studies of ASP.  It’s interesting that 74 of these studies were funded by the aspartame industry, and 86 were independently funded.  All of the industry-funded studies supported ASP’s safety, yet 92 percent of the independently-funded studies uncovered some concerns.  Surprised?  So, if scientists are in doubt, leave it out. Scientific American reported that if a study was performed by a biased group, then favorable results were observed 66 percent of the time.  However, if the study was performed by a non-biased group, favorable results were only obtained 16 percent of the time.  Go figure!

How sweet it isn’t.

A sweet change.  As of this writing, aspartame is still the most popular artificial sweetener added to diet drinks.  That may soon change. In April of 2015 PepsiCo announced it would no longer put aspartame in its diet sodas.

Let’s break down the whole word aspartame into “aspart” (keep it far apart from your body) and “tame” (tame its use).  Many scientists are concerned that when you start with a factory-produced chemical, it may be broken down in the body into chemicals that are bad for the body – from unnatural to more unnatural.  This seems to be what happens.  For example, the phenylalanine is broken down into methanol, which is then further broken down into formaldehyde.  Supporters claim that methanol (a solvent), and perhaps even formaldehyde, are sometimes formed during the metabolism of normal food.  But if this is true, why put more of this stuff into your body?  Other supporters say not to worry because formaldehyde is rapidly broken down into water and carbon dioxide, and rapidly excreted from the body.  Does it make sense to put garbage into your body and overload the garbage-disposal system?  We don’t think so.

MSG.  How MSG got famous: A war story.  Having discovered it was an incredible taste enhancer from seaweed known as kombu, the Japanese government added MSG to military food.  Unlike the bland food of American soldiers, the Japanese food tasted delicious.  When American soldiers ate some of the food rations from the Japanese prisoners they took, the military decided to investigate why the Japanese military food tasted so much better than the food made in America.  It’s interesting that in 1948 a military meeting was held to answer this question and was attended by the who’s-who of Big Food.  MSG removed the tinny taste of canned foods and turned bland foods into tasty ones.  And, the rest is rich history.

The food industry has grown smarter for the same reason the brain does: the ability to adapt quickly to change.  As soon as MSG was getting a deservedly bad rap and its safety was being questioned and even being labeled a neurotoxin, Big Food decided MSG would be a bad word to have on the label.  So, they changed the term and out came disguises, such as hydrolyzed vegetable protein, vegetable protein, natural flavoring, and spices.  The FDA turned its back on these neurotoxic imposters.  It’s interesting one of the earliest discoveries of the toxic effects of MSG was found in the retina of the eye.  At that time even baby foods contained large doses of MSG, making it more appealing to picky eaters.  It took the government 20 years after this discovery was made before manufacturers voluntarily removed MSG from baby foods.  Even more disastrous was the parts of the brain that seemed to be most affected by MSG are not protected by the BBB (blood brain barrier)—the hypothalamus.  The child’s brain is much more sensitive than the adult brain to these toxins.

MSG toxic to one of the most important and sensitive areas of the brain, the hypothalamus, that tiny fingernail-sized area that controls your biological clock, most of the endocrine gland secretions, sleep cycles, and regulates a whole bunch of other dials.

Early studies also found it was toxic to pregnant women.

MSG, label loopholes.  MSG is not required on food labels unless it contains 100 percent pure MSG.  Also, MSG does not have to be mentioned by any name if one product containing pure MSG is used only as an ingredient in another food.  For example, if broth is used to make a soup and the broth contains pure MSG, MSG does not have to be listed as an ingredient.  But, if the broth is sold alone, it must appear on the label.  Studies have revealed that some substances labeled as “natural flavoring” and “flavorings” may contain anywhere from 30 to 60 percent MSG.

Page 243:  The GRANT Study. When scientists began tracking the health of 268 Harvard sophomores in 1938 during the Great Depression, they hoped the longitudinal study would reveal clues to leading healthy and happy lives.

“The surprising finding is that our relationships and how happy we are in our relationships has a powerful influence on our health,” said Robert Waldinger, director of the study, a psychiatrist at Massachusetts General Hospital and a professor of psychiatry at Harvard Medical School. “Taking care of your body is important, but tending to your relationships is a form of self-care too. That, I think, is the revelation.”

Close relationships, more than money or fame, are what keep people happy throughout their lives, the study revealed. Those ties protect people from life’s discontents, help to delay mental and physical decline, and are better predictors of long and happy lives than social class, IQ, or even genes. That finding proved true across the board among both the Harvard men and the inner-city participants.

Page 269:  The Naperville Study.  Unhealthful teens at Naperville High were divided into two groups: those who were encouraged to come to school for a “zero period” and exercise vigorously for a half hour before school, and those who did not come for “zero period.”  Researchers found that the movers became healthier than the sitters.

Page 335:  Why you get goosebumps. Goosebumps, called emotional piloerections (yes, only in research laboratories), are more common in more sensitive persons.  The hair follicles in the skin dimple and the hair stands on end, and is most commonly felt on the back of the head and neck.  When something “tear-jerking” hits the ears and/or eyes (a story, movie, music, or vivid memory) the auditory and visual centers send neurochemical texts to the emotional center of the brain, the amygdala and other centers, to produce tears and trigger the autonomic nervous system to send nerve impulses, like waves to the skin, producing goosebumps, and often to the heart and lungs to increase the heart rate and breathing rate.

Some very emotional, compassionate and empathetic persons are able to self-produce their own goosebumps by recalling beautiful memories, such as a birth, or even while listening to music that triggers emotional memories.  In effect, they are able to self-medicate and self-induce goosebumps, a sign their brain is self-producing more happy hormones and other neurochemicals of emotion.