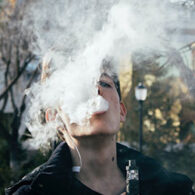 The good news is that teen cigarette smoking has been gradually declining over the past ten years.  The bad news is that teen vaping is increasing.  According to a lead article in the January 2021 edition of Pediatric News over twenty percent of high school students report using e-cigarettes.  Even sadder news is couple vaping with the COVID pandemic and, parents, we have a problem.

Vaping sets up a person to be at increased risk of suffering from COVID by two mechanisms: the smoke from vaping damages the lining of the lungs so that if the COVID virus gets in the otherwise protective lining of the lungs can’t kick it back out because the smoke paralyzes the cilia, the millions of tiny fan-like hair cells that catch virus particles and sweep them upward so you can cough them out.  Secondly, the toxins from vaping weaken the immune system.  Weakened cilia and a weakened immune system is a double whammy to set-up a person for COVID.

Vaping is becoming so common as a cause of hospitalizations that there is now a new medical term for the lung injury from vaping – EVALI ( E-cigarette Vaping-Associated Lung Injury).  Since vaping e-cigarettes does not cause the tell-tale odor of cigarette smoker’s breath, it’s often tough to tell when your teen is vaping.  If you get clues such as changing behaviors and judgments see if your teen’s school has any programs on discouraging vaping.  The American Academy of Pediatrics recommends a useful tool that has been found successful for discouraging teen vaping.  Use the same marketing ploy that works in adults – the use of an “influencer.”  Convince the school to pick a trusted peer model, such as a football captain or cheerleader captain, to make an inspiring video and appear “cool” to their peers as they explain the dangers – and the stupidity – of vaping.  The main message is: “We are smarter and better than to treat our bodies like that.” Like so many teen tools, the earlier you can teach your teen to avoid vaping, the better you increase the likelihood of lessening a lot more addictions that may occur in the future.