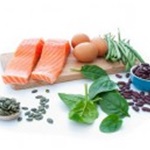 Oftentimes parents bring their child to me for consultation on learning or behavioral problems at school. They typically open their concern with, “We and our child’s teacher believe he has A.D.D….” After taking a nutritional history, I often reply, “Your child doesn’t have A.D.D., he has N.D.D.” (A term Dr. Bill coined).  Obviously, they look surprised. They don’t know what N.D.D. is, but it doesn’t sound like something they want their child to have. I go on to explain that what I mean by N.D.D. — nutrition deficit disorder. In my experience, many children described as having A.D.D. lose this tag once their N.D.D. is treated.

Here’s how N.D.D is treated:

Since the brain is 60% fat, it stands to reason that growing brains need high-quality fats. Smart fats make the brain grow and perform better. Smart fats, are the omega-3 fatty acids that are found in especially high amounts in seafood. Omega-3 fats are also found in some plants (e.g., flaxseed oil, canola oil, nuts, and seeds), but the omega-3 fats found in plants have to be converted from shorter-chain fatty acids to longer ones before they can be used in the brain. Seafood is the most direct source of long-chain omega 3’s and supplements containing the most important Omega 3, DHA (See Healing Effects of Omega-3’s, Omega-3’s and DHA as Brain Food, The Omega-Effect).

Oceans of recent research show that omega-3 fats make brains healthier, especially the brains of young kids and older adults. Researchers believe that the high levels of omega-3 fats in breast milk help to explain the differences in IQ between children who received human milk in infancy and those who did not. The body uses omega-3 fats to make cell membranes. Omega-3 fats are also needed to make myelin, the insulation around nerves, and to help neurotransmitters function at the optimal levels. Omega-3 fats are known as essential fatty acids from food. Other types of fats can be manufactured in the body, but the body cannot make essential fatty acids. That is why it is important for growing brains to get adequate amounts of these smart fats from food. If there are not enough “smart” fats available to make brain cells and other key substances, the body uses lesser-quality fats and produce s lesser-quality cells. The “dumb” fats (known as replacement fatty acids), the kind that come from the trans fats in hydrogenated oils, clog the receptors in the cell membrane, and the brain cell does not function well (See Healing Effects of Omega-3’s, Omega-3’s and DHA as Brain Food, The Omega-Effect). Neurotransmitters, the biochemical messengers that carry information from one brain cell to another, fit into receptors on cell membranes like a key fits into a lock. The keys and the locks must match. If the cell membrane is composed of the right fats, the locks and keys match. But if the receptors are clogged with the wrong fats, the neurotransmitter keys won’t fit, and the brain-cell function suffers. Omega-3 fats keep the receptors open so the neurotransmitters fit and the brain can function optimally.

In the past few years several studies showed that growing children diagnosed with A.D.D. who were given Omega-3 supplements, especially DHA improved their attention and learning (See Omega-3’s and DHA as Brain Food).

In order for kids to learn they have to be able to concentrate. Studies show that omega-3 fats help the brain pay attention and make connections. Researchers at Purdue University found that boys with A.D.H.D. (Attention Deficit Hyperactivity Disorder) had lower levels of omega-3 fats, especially DHA, the main omega-3 fat found in fish. The boys with the most abnormal behavior had the lowest levels of DHA. School-age children with the highest levels of omega-3 fatty acids in their blood had the fewest learning problems. In addition, students who were given DHA supplements prior to exams showed less hostility and aggression during this time of stress.

Around 50 percent of the energy from the carbohydrates children eat goes to fueling their growing brains. Muscles can store glucose, the body’s main fuel, extracted from digested carbs. But the brain can’t store much glucose. It depends on a steady supply of glucose in the bloodstream. If the blood sugar dips too low, brain function can deteriorate within minutes. The brain is very selective about the carbs it craves, and it prefers that you eat the right carbs with the right partners at the right time. If brain cells could comment on the best ways to give them the carbs they need, here’s what they would request:

Blueberries are a great brain food. The deep blue skin of the blueberry is full of flavonoids, especially anthocyanin, and antioxidant that helps keep both growing and aging brains healthy.

Physical exercise is good for brains as well as bodies, so get your kids up and moving. Consider movement another brain food. Improving blood flow to any organ, especially the brain, is like watering and fertilizing a garden. More blood means more nutrients. When you move your muscles, especially the large muscles in your arms and legs, which you use in vigorous exercise, your heart works harder to pump blood through your veins and arteries.