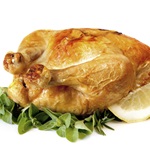 Poultry holds the middle ground in the eating-of-animal-flesh debate. It’s better for you than beef, but not as good for you as seafood.

Compared with beef, poultry is:

• slightly lower in calories, depending on the cut

• lower in fat, depending on the cut

• lower in zinc and iron (except for turkey breasts)

• It’s easier to lower the fat level in chicken or turkey than in beef.

The most important thing you can do to get less saturated fat from your bird is to remove the skin, since most of the fat is found here rather than marbled through the bird’s muscle. Removing the skin from the poultry reduces the calories by at least 20 percent and the fat by 40-50 percent, but it does not significantly change cholesterol levels.

• Turkey offers certain advantages over chicken. It is around 20 percent lower in calories and 75 percent lower in fat. Turkey is rich in niacin, with 7 milligrams in a 31/2 ounce serving (33 percent of RDA), though this is half the amount in chicken. Turkey contains more zinc and iron and slightly more vitamin E. Three-and-half ounces of turkey breast contain a paltry one gram of fat. Ground turkey patties are a healthy alternative to beef burgers. (Read the label on the ground turkey package. Some ground turkey contains a lot of dark meat and a great deal of fat. Choose your cut of turkey breast and have the butcher grind it for you.)

• Poultry safety. One problem with poultry is how chickens are raised and fed. At least in theory, free-roaming chickens (listed on menus and labels as “free-range” chickens) produce healthier eggs, at least if they are depending on the chicken feed. If, as studies have shown, free-range chickens produce healthier eggs, perhaps we could assume the meat of free-range chickens is also more nutritious. Common sense would tell us that a healthier chicken who is outdoors in the fresh air and sunshine would be better to eat than one that has spent its short, sad life penned up in a cage unable to roam and search for natural food.