I would like to introduce you to a style of parenting which will bring out the best in your baby and yourself. During my thirty 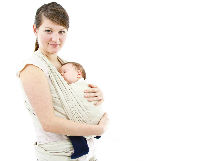 years as a pediatrician, parents in our practice would often say, “As long as I carry my baby she’s content.” After years of watching a whole parade of babywearers we dubbed these thriving infants “sling babies.” Many kids ago we noticed that the more we carried our babies the less they cried. With each baby, we began carrying them more and more. By the time baby number six, Mathew, entered the family we wanted to become more experienced at babywearing.

Because we noticed that cultures throughout the world carried their babies in homemade slings we began fabricating different styles of slings to carry Mathew. I remember one day when Martha fabricated a sling out of material from an old bed sheet and said, “I really enjoy wearing Mathew. The sling is like a piece of clothing. I put it on in the morning and take it off in the evening.” Hence the term “babywearing” was born in the Sears household.

Since that time we have worn two more infants, Steven and Lauren, and over the past fifteen years have encouraged hundreds of parents in our pediatric practice to wear their babies, as well as promoted the art and science of babywearing in our many articles and books. Since 1985, when we began our personal study on the beneficial effects of babywearing on babies and their parents, we have logged many miles wearing our own babies and have continued to advise this style of parenting in our pediatric practice. At their baby’s first check up, we show new parents how to wear their baby. During this personal course on babywearing, we advise parents to experiment with various training positions to find the one that is most comfortable and allows the baby to mold to the contour of the parent’s body. I encourage parents in our practice to wear instead of wheel their babies.

Babywearing means changing your mindset of what babies are really like. New parents often envision babies as lying quietly in a crib, gazing passively at dangling mobiles, and being picked up and carried only to be fed and played with and then put down. You may think that “up” periods are just dutiful intervals to quiet your baby long enough to put him down again. Babywearing reverses this view. Carry your baby in a sling many hours a day, and then put her down for sleep times and tend to your personal needs.

I wore Mathew a lot during the first year of his life. We were buddies from birth. Mathew grew up associating the sling with a fun and exciting place to be. When I would mention the cue word “go,” nine-month-old Mathew would crawl to where the baby sling was hanging (because in his developing mind was a flashback that “go” meant daddy would put Mathew in the sling) and we’d take an exciting walk together. These babywearing moments Mathew may never remember, but I shall never forget.

Click here for more babywearing resources from the Sears family.

There’s a problem here its become quite clear.
Got a 6-month-old Sling fanatic who is clearly an addict.
Wakes in the mid of night screams with horrific might.
So outa the bed I fling and don the medicinal Sling.
Over the head the tool I fit and in it, him I sit.
Instantly he begins to cooo tis amazing what the sling will do.
Which route should I pursue, when he’s 20 what should I do?
I gotta wean him from the Sling I tell you, its an addictive thing!