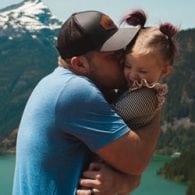 As a father and certified babywearer, I feel that it’s important that a baby gets used to father’s handling too. Father has a different rhythm to his walk; a difference that baby learns to appreciate. The snuggle hold and neck nestle are favorite positions for babywearing dads.

Place the baby in the snuggle position and lift him up a bit until his head nestles into your neck and your neck and chin drape over baby’s head. You will have found one of the most comforting and calming holding patterns. In the neck nestle, babywearing dads have a slight edge over moms. Babies hear not only through their ears but also through the vibration of their skull bones. By placing baby’s head against your voice box, in the front of your neck, and humming and singing to your baby, the slower, more easily felt vibrations of the lower-pitched voice of babywearing dads often lull baby right to sleep. As you rock and walk with your baby, sing a calming song such as “Old Man River.”

Another attraction to the neck nestle is that baby feels the warming air from your nose on her scalp. (Experienced mothers have long known that sometimes just breathing onto baby’s head or face will calm her. They call this “magic breath.”) My babies have enjoyed the neck nestle more than any of the other holding patterns, and I have too. Babywearing dads become a more active shareholder in raising their babies.

For a father to be comfortable wearing his baby and a baby to respond to dad’s babywearing techniques are real bonuses for mothers of high-need babies. It helps prevent mother burnout. Here is a common scenario a mother of a high- need baby recently shared with me:

I love our new baby, but he is one of those high-need babies that needs to be worn constantly. He was wearing me down, and I was burning out. My husband feels very insecure in calming fussy babies, and for this reason, I was reluctant to release our baby to him during those trying fussy times. The sling was the answer. After my husband got used to wearing our baby, and I saw that our baby liked it, I felt more comfortable releasing our baby to him. Initially, I would hover over my husband to make sure our baby would stop fussing, but as soon as he proved himself a competent babywearer I felt a sense of relief. Even though I wear our baby most of the time, just having my husband share this beautiful experience gives me a much-needed break.

My own experience is similar. I felt a real high the first time I put Stephen in the neck nestle and snuggled him securely against my chest for a walk. As we strolled together, I felt a sense of completeness. Sometimes I wore him for hours at a time. I felt right when we’re together and not right (or complete) when we were apart. These are feelings usually reserved for the mother-infant pair. I wanted a piece of this babywearing action, too. The more I wore Stephen, the more comfortable we both became at trying different wearing positions. The more he liked it, the more I liked it, and the more we enjoyed being together.