Understanding why do babies cry so much?

Your baby’s cries all have a purpose.  This is their only way at this time to communicate with you that they need you. Dr. Sears deciphers why babies cry and what they mean.

The basic answer to why do babies cry is that it is an automatic reaction. A perfect signal is automatic. Newborns cry by reflex. The infant senses a need, which triggers a sudden inspiration of air followed by a forceful expelling of that air through vocal cords, which vibrate to produce the sound we call a cry. In the early months, the tiny infant does not think, “What kind of cry will get me fed?” He just automatically cries. Also, the cry is easily generated. Once his lungs are full of air, the infant can initiate crying with very little effort.

You Are Supposed to Notice

The cry is appropriately disturbing: ear-piercing enough to get the caregiver’s attention and make him or her try to stop the cry, but not so disturbing as to make the listener want to avoid the sound altogether.

Not All Cries Are The Same

Looking further into why do babies cry you learn that the cry can be modified as both the sender and the listener learn ways to make the signal more precise. Each baby’s signal is unique. A baby’s cry is a baby’s language, and each baby cries differently. Voice researchers call these unique sounds cry prints, which are as unique for babies as their fingerprints are. 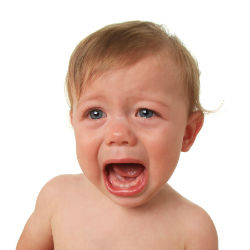 newborn’s cries and not to restrain herself. Fascinating biological changes take place in a mother’s body in response to her infant’s cry. Upon hearing her baby crying, the blood flow to a mother’s breasts increases, accompanied by a biological urge to “pick up and nurse.” The act of breastfeeding itself causes a surge in prolactin , a hormone that we feel forms the biological basis of the term “mother’s intuition.” Oxytocin, the hormone that causes a mother’s milk to letdown, brings feelings of relaxation and pleasure; a pleasant release from the tension built up by the baby’s cry. These feelings help you love your baby. Mothers, listen to the biological cues of your body when your baby cries rather than to advisors who tell you to turn a deaf ear. These biological happenings explain why it’s easy for those advisors to say such a thing. They are not biologically connected to your baby. Nothing happens to their hormones when your baby cries.

Ignore or Respond to the Cry Signal?

Once you appreciate the special signal value of your baby’s cry, the important thing is what you do about it. You have two basic options, ignore or respond. Ignoring your crying baby is usually a lose-lose situation. A more compliant baby gives up and stops signaling, becomes withdrawn, eventually realizes that crying is not worthwhile, and concludes that he is not worthwhile. The baby loses the motivation to communicate with his parents, and the parents miss out on opportunities to get to know their baby. Everyone loses. A baby with a more persistent personality— most high-need babies—does not give up so easily. Instead, he cries louder and keeps escalating his signal, making it more and more disturbing. You could ignore this persistent signal in several ways. You could wait it out until he stops crying and then pick him up, so that he won’t think it was his crying that got your attention. This is actually a type of power struggle; you teach the baby that you’re in control, but you also teach him that he has no power to communicate. This shuts down parent-child communication, and in the long run everybody loses. You could desensitize yourself completely so that you’re not “bothered” at all by the crying; this way you can teach baby he only gets responded to when it’s “time.” This is another lose-lose situation; baby doesn’t get what he needs and parents remain stuck in a mindset where they can’t enjoy their baby’s unique personality. Or, you could pick baby up to calm him but then put him right back down because “it’s not time to feed him yet.” He has to learn, after all, to be happy “on his own.” Lose-lose again; he will start crying again and you will feel angry. He will learn that his communication cues, though heard, are not responded to, which can lead him to distrust his own perceptions: “Maybe they’re right. Maybe I’m not hungry.”

Your other option is to give a prompt and nurturing response. This is the win-win way for baby and mother to work out a communication system that helps them both. The mother responds promptly and sensitively so that baby will feel less frantic the next time he needs something. The baby learns to “cry better,” in a less disturbing way since he knows mother will come. Mother structures baby’s environment so that there is less need for him to cry; she keeps him close to her if she knows he’s tired and ready to sleep. Mother also heightens her sensitivity to the cry so that she gives just the right response. A quick response when baby is young and falls apart easily or when the crying makes it clear there is real danger; a slower response when the baby is older and begins to learn how to settle disturbances on his own.

Responding appropriately to your baby’s cry is the first and one of the most difficult, communication challenges you will face as a mother. You will master the system only after rehearsing thousands of cue-responses in the early months. If you initially regard your baby’s cry as a signal to be responded to and evaluated rather than as an unfortunate habit to be broken, you will open yourself up to becoming an expert in your baby’s signals, which will carry over into becoming an expert on everything about your baby. Each mother-baby signal system is unique. That’s why it is so shortsighted for “cry trainers” to prescribe canned cry-response formulas, such as “leave her to cry for five minutes the first night, ten minutes the second,” and so on.

It’s Not Your Fault Babies Cry

Parents, take heart! Many parents when wondering why do babies cry think it is their fault. If you are responsive to your baby and try to keep him feeling secure in his new world, you need not feel that it’s your fault if your baby cries a lot. Nor is it up to you to stop your baby’s crying. Of course, you stay open to learning new things to help your baby (like a change in your diet or a new way of wearing baby), and you get your doctor involved if you suspect a physical cause behind the crying. But there will be times when you won’t know why your baby is crying—you’ll wonder if baby even knows why he’s crying. There may be times when baby simply needs to cry, and you needn’t feel desperate to make him stop after trying all the usual things.

It’s a fact of new parent life that although babies cry to express a need, the style in which they do so is the result of their own temperament. Don’t take crying from your baby personally. Your job is to create a supportive environment that lessens baby’s need to cry, to offer a set of caring and relaxed arms so that baby does not need to cry alone, and to do as much detective work as you can to figure out why your baby is crying and how you can help. The rest is up to baby.

“When I was confused about my mothering, I asked a seasoned calm, impartial mother to observe how I handled my baby on a typical day in my home. Although I know I’m the expert on my own baby, sometimes it’s hard to be objective, and a voice of experience can be helpful.”

Research on Why Babies Cry

Researchers Sylvia Bell and Mary Ainsworth performed studies on why do babies cry in the 1970’s that should have put the spoiling theory on the shelf to spoil forever. (It is interesting that up to that time and even to this day, the infant development writers that preached the cry-it-out advice were nearly always male. It took female researchers to begin to set things straight.) These researchers studied two groups of mother-infant pairs.Group 1 mothers gave a prompt and nurturant response to their crying infant. Group 2 mothers were more restrained in their response. They found that children in Group 1 whose mothers had given an early and more nurturant response were less likely to use crying as a means of communication at one year of age. These children seemed more securely attached to their mothers and had developed better communicative skills, becoming less whiny and manipulative.

Up until that time parents had been led to believe that if they picked up their baby every time she started crying she would never learn to settle herself and would become more demanding. Bell and Ainsworth’s research showed the opposite. Babies who developed a secure attachment and had their cues responded to in a prompt and nurturing way became less clingy and demanding. More studies were done to shoot down the spoiling theory, showing that babies whose cries were not promptly responded to begin to cry more, longer, and in a more disturbing way.

In one study comparing two groups of crying babies, one group of babies received an immediate, nurturant response to their cries, while the other group was left to cry-it-out. The babies whose cries were sensitively attended to cried seventy percent less. The babies in the cry-it-out group, on the other hand, did not decrease their crying. In essence, crying research has shown that babies whose cries were listened and responded to learned to “cry better;” the infants who were the product of a more restrained style of parenting learned to “cry harder.”

It is interesting that the studies revealed differences not only in how the babies communicated with the parents based on the response they got to their cries, but there were also differences in the mothers, too. Studies showed that mothers who gave a more restrained and less nurturant response gradually became more insensitive to their crying baby, and this insensitivity carried over to other aspects of their parent-child relationship. Research showed that leaving baby to cry-it- out spoils the whole family.

One of the most ridiculous pieces of medical folklore is the dictum: “Let baby cry, it’s good for his lungs.” In the late 1970’s, research showed that babies who were left to cry had heart rates that reached worrisome levels, and lowered oxygen levels in their blood. When these infants’ cries were soothed, their cardiovascular system rapidly returned to normal, showing how quickly babies recognize the status of well being on a physiologic level. When a baby’s cries are not soothed, he remains in physiologic as well as psychological distress.

The erroneous belief about the healthfulness of crying survives even today in one of the scales of the Apgar score, a sort of test that physicians use to rapidly assess a newborn’s condition in the first few minutes after birth. Babies get an extra two points for “crying lustily.” I remember pondering this concept back in the mid 1970’s when I was the director of a newborn nursery in a university hospital, even before fathering a high-need baby had turned me into an opponent of crying it out. It seemed to me that awarding points for crying made no sense physiologically. The newborn who was in the state of quiet alertness, breathing normally, and actually pinker than the crying infant lost points on the Apgar score. It still amazes me that the most intriguing of all human sounds—the infant’s cry—is still so misunderstood.