There has been a lot of media claiming that sleeping with your baby in an adult bed is unsafe and can result in accidental smothering of an infant. One popular research study came out in 1999 from the U.S. Consumer Product Safety Commission that showed 515 cases of accidental infant deaths occurred in an adult bed over an 8-year period between 1990 and 1997. That’s about 65 deaths per year. These deaths were not classified as Sudden Infant Death Syndrome (SIDS), where the cause of death is undetermined. There were actual causes that were verified upon review of the scene and autopsy. Such causes included accidental smothering by an adult, getting trapped between the mattress and headboard or other furniture, and suffocation on a soft waterbed mattress.

The conclusion that the researchers drew from this study of research on SIDS was that sleeping with an infant in an adult bed is dangerous and should never be done. This sounds like a reasonable conclusion, until you consider the epidemic of SIDS as a whole. During the 8-year period of this study, about 34,000 total cases of SIDS occurred in the U.S. (around 4250 per year). If 65 cases of non-SIDS accidental death occurred each year in a bed, and about 4250 cases of actual SIDS occurred overall each year, then the number of accidental deaths in an adult bed is only 1.5% of the total cases of SIDS.

There are two pieces of critical data that are missing that would allow us to determine the risk of SIDS or any cause of death in a bed versus a crib.

The data on the first question is available, but has anyone examined it? In fact, one independent researcher examined the CPSC’s data and came to the opposite conclusion than did the CPSC – this data supports the conclusion that sleeping with your baby is actually SAFER than not sleeping with your baby (see Mothering Magazine Sept/Oct 2002). As for the second question, many people may think that very few babies sleep with their parents, but we shouldn’t be too quick to assume this. The number of parents that bring their babies into their bed at 4 am is probably quite high. Some studies have shown that over half of parents bring their baby into bed with them at least part of the night. And the number that sleep with their infants the whole night is probably considerable as well. In fact, in most countries around the world sleeping with your baby is the norm, not the exception. And what is the incidence of SIDS in these countries? During the 1990s, in Japan the rate was only one tenth of the U.S. rate, and in Hong Kong, it was only 3% of the U.S. rate. These are just two examples. Some countries do have a higher rate of SIDS, depending on how SIDS is defined.

Until a legitimate survey is done to determine how many babies sleep with their parents, and this is factored into the rate of SIDS in a bed versus a crib, it is unwarranted to state that sleeping in a crib is safer than a bed.

If the incidence of SIDS is dramatically higher in crib versus a parent’s bed, and because the cases of accidental smothering and entrapment are only 1.5% of the total SIDS cases, then sleeping with a baby in your bed would be far safer than putting baby in a crib.

Now the U.S. Consumer Product Safety Commission and the Juvenile Products Manufacturer’s Association are launching a campaign based on research on SIDS from 1999, 2000, and 2001. During these three years, there have been 180 cases of non-SIDS accidental deaths occurring in an adult bed. Again, that’s around 60 per year, similar to statistics from 1990 to 1997. How many total cases of SIDS have occurred during these 3 years? Around 2600 per year. This decline from the previous decade is thought to be due to the “back to sleep” campaign – educating parents to place their babies on their back to sleep. So looking at the past three years, the number of non-SIDS accidental deaths is only 2% of the total cases of SIDS.

A conflict of interest?

Who is behind this new national campaign to warn parents not to sleep with their babies? In addition to the USCPSC, the Juvenile Products Manufacturers Association (JPMA) is co-sponsoring this campaign. The JPMA? An association of crib manufacturers. This is a huge conflict of interest. Actually, this campaign is exactly in the interest of the JPMA.

What does the research say?

The September/October 2002 issue of Mothering Magazine presents research done throughout the whole world on the issue of safe sleep. Numerous studies are presented by experts of excellent reputation. And what is the magazine’s conclusion based on all this research? That not only is sleeping with your baby safe, but it is actually much safer than having your baby sleep in a crib. Research shows that infants who sleep in a crib are twice as likely to suffer a sleep related fatality (including SIDS) than infants who sleep in bed with their parents.

I do support the USCPSC’s efforts to research sleep safety and to decrease the incidence of SIDS, but I feel they should go about it differently. Instead of launching a national campaign to discourage parents from sleeping with their infants, the U.S. Consumer Product Safety Commission should educate parents on how to sleep safely with their infants if they choose to do so.

Here are some ways to educate parents on how to sleep safely with their baby: 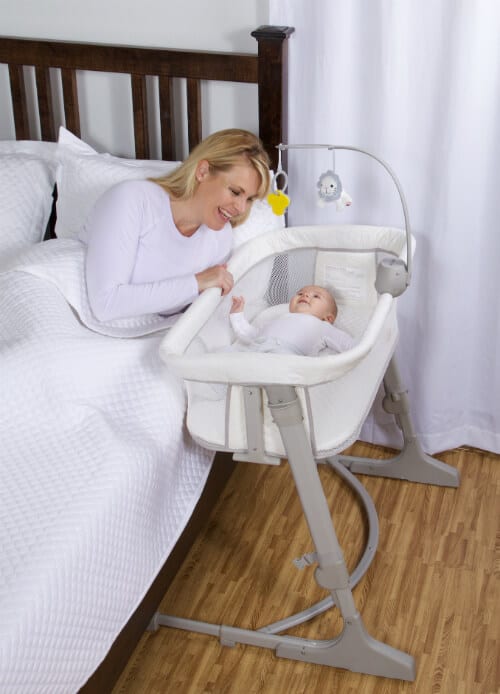 Here are some things to avoid:

Parents should use common sense when sharing sleep. Anything that could cause you to sleep more soundly than usual or that alters your sleep patterns can affect your baby’s safety. Nearly all the highly suspected (but seldom proven) cases of fatal “overlying” I could find in the literature could have been avoided if parents had observed common sense sleeping practices.

The bottom line is that many parents share sleep with their babies. It can be done safely if the proper precautions are observed. The question shouldn’t be “is it safe to sleep with my baby?”, but rather “how can I sleep with my baby safely.” The data on the incidence of SIDS in a bed versus a crib must be examined before the medical community can make a judgment on sleep safety in a bed.

Read more about SIDS in our SIDS Facts article.