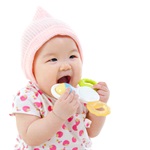 Guidelines for When Should Baby Teeth Appear

Knowing the exact answer to “When should baby teeth appear?” is as unexpected as the timing of baby’s first steps. In general, expect the first sharp nubbin around six months; some babies teethe earlier, some later. Heredity plays a part. If you check your own baby book, if grandmother was a tooth-record keeper, your baby’s teething schedule may resemble yours.

Actually, babies are born with a full set of twenty primary teeth. They are just buried in the gums, waiting in line for their time to sprout. While every child is different, there are some general patterns we see with emerging teeth: