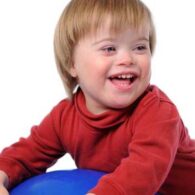 Down Syndrome Occurs at the Cell Level

Down Syndrome occurs when a baby is born with 47 chromosomes instead of 26. Let me explain. Normally, a sperm and an egg each contain twenty-three chromosomes. At fertilization they combine to form a cell with forty-six chromosomes. Sperm and egg cells undergo normal divisions, called meiosis, producing exact copies of the original cell. Sometimes, by chance, during meiosis the division is unequal. One cell gets one less chromosome and dies. The other cell gets one extra chromosome and lives. If this cell (95 percent of the time it’s the egg) joins with the sperm (or egg), the resulting fertilized egg contains forty-seven chromosomes. In the case of Down Syndrome, the extra chromosome is number 21. The genetic name for this syndrome is trisomy 21, that is, the cells have three number-21 chromosomes.  There are other trisomies that usually end in miscarriage or early infant death.

Why an extra chromosome causes the features of Down Syndrome is unknown. This unequal division of cells is called nondisjunction. It occurs by chance and accounts for 95 percent of the chromosome abnormalities in Down Syndrome. A rare genetic form of this syndrome (occurring in around 2 to 3 percent of these babies) happens by the mechanism of translocation. In this situation, one of the number-21 chromosomes parts company with its mate. Next, it attaches to another chromosome, giving the appearance of the cell having only forty-five chromosomes. However, the person is normal because he or she has all the genetic material of forty-six chromosomes. When a sperm or an egg from this normal person containing the translocated number-21 chromosome joins with another sperm or egg, the resulting fertilized egg appears to have forty-six chromosomes, but actually has three number-21 chromosomes.

To confirm which type of chromosome abnormality your baby has, a geneticist analyzes your baby’s chromosomes in a blood sample. The type of chromosomal abnormality, either nondisjunction or translocation, can be ascertained by looking at the chromosome alignment in your baby’s blood cells. While most translocation abnormalities occur by chance, occasionally one parent is a carrier of cells that may contain a translocated number-21 chromosome and therefore has an increased risk of having more Down Syndrome babies. If the analysis of baby’s blood reveals a translocation type of abnormality, analysis of the parents’ blood will reveal whether this happened by chance or whether a parent is a carrier and therefore has a risk of future babies inheriting this abnormality.

Another type of Down Syndrome is called mosaicism, meaning some of the baby’s cells contain the normal number of chromosomes, and others have an extra number 21. This is why many cells of your baby’s blood are analyzed. Sometimes, but not always, a baby with mosaic Down Syndrome is less affected.

For more information on Down Syndrome, visit our website.