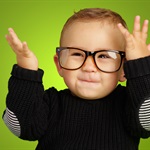 New insights into how baby brains grow show that parents can have a profound effect on how smart their child later becomes. The brain grows more during infancy than at any other time, doubling its volume and reaching approximately 60% of its adult size by year one! As the brain grows, nerve cells, (called neurons) proliferate, resembling miles of tangled electrical wire. The infant is born with much of this wiring unconnected. During the first year, these neurons grow larger, learn to work better, and connect with each other to make circuits, which enable baby to think and do more things.

How the Brain Circuits Work

The tip of each neuron resemble finger-like feelers attempting to make connections with other nerves. During development two important improvements are made on the growing infant’s nervous system.

This new and exciting field is called neurobiology, which in essence tells us that the more connections the nerve cells make, the smarter the child’s brain.

Make a Difference in Your Baby’s Brain Development

During the last decade, exciting new research has given parents and infant-care professionals a deeper understanding of how a baby’s brain develops. Baby brain growth used to be viewed as a sort of a developmental elevator. At each floor the door automatically opens and a new skill gets on. Given a reasonable amount of nurturing, healthcare, and adequate nutrition, the brain grows, and babies would graduate from one developmental stage to another at a pace determined both by nature (inherited genes) and nurture (parenting practices and learning stimuli). The interplay between nature and nurture determines how a baby’s brain develops.

In terms of the elevator analogy, the baby reaches each developmental floor already equipped with certain competencies. How these competencies flower into skills depends upon the interaction with the caregiving environment a baby finds on that floor. If the interaction is responsive and enriching, the baby gets back on the elevator with more skills and the ride up to the next floor is much smoother. Because baby reaches the next floor with more skills, the interaction on the next level of development is even more rewarding.

As a result of environmental input, these nerves grow and make better connections. For example, the infant sees his mother or father’s face. The nerves of the eyes transmit the image of the face to the area of the brain that processes visual information and the infant stores the image of this face. Repeatedly seeing the face stimulates the infant to want to react. Eventually, the stimulus of a parent’s face causes the visual area of the brain to send a message to the motor area, which controls the infant’s facial muscles. The result is the adoring smile. With continued neurological development, connections are made with other motor areas, so eventually the baby can reach out and touch his mother and father’s face with his hands.

The moral of this neurological story: The more the infant has organized interaction with his environment, the more neurological connections he is able to develop!