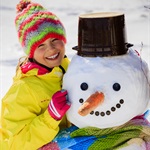 Snow and ice are sweeping the nation leaving roads icy and dangerous. During these frigid temperatures you may be tempted to leave your baby’s coat on while buckled into their seat. Here is a quick reminder about winter coats and car seat safety:

Remember that bulky clothing, such as winter coats and snowsuits, can compress in a crash and lead to increased risk of injury. Straps on your infant’s car seat should be tight enough to pass the “pinch test.” When fully buckled in, you should not be able to pinch the webbing together at the shoulder and the chest clip is at armpit level. Ideally you should dress your baby in thinner layers and tuck a coat or a blanket around your baby over the buckled harness straps if needed.