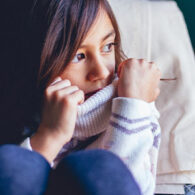 The phrase “break a habit” has some biological truth behind it. A child’s developing brain consists of miles of tangled electrical wires. As the child learns and grows, he makes connections between all these nerve wires that store patterns of association. Patterns of association are things that belong together based on the child’s experience, for example, feeling tense and relieving the tension through thumbsucking. Patterns that are repeated over and over again become nervous habits in children. Eventually, the child performs these actions without even thinking about them. To break the habit, you have to put a roadblock in the nerve pathway where the habit is stored. This will result in breaking off the connection between the action and the circumstances that trigger it. It’s important to break undesirable habits before they become mannerisms — part of a child’s personality — and lead to unflattering labels from other children like “Tommy Twitch.”

Does this habit even need breaking? Should you intervene or simply grin and bear it and let the child enjoy the habit? After all, if ignored, most nervous habits in children eventually self-destruct, and if you intervene you risk pushing the child from the frying pan into the fire. Nervous habits in children may be their own way of relaxing or retreating momentarily from pressures and expectations into their own world: a mini time-out, a chance to do his own thing. If you take away a harmless tension reliever, something less desirable may take its place. As a general guide, if the habit bothers the child (his thumb is getting infected or his teeth crooked) or the habit results in teasing from others or social isolation, it’s time to intervene. Here’s how:

What conditions set up the child to twitch, bite her nails, pull her hair, bang her head, pick her nose, or grind her teeth? Is she bored, tired, angry, or nervous? Keep a habit diary, and as much as possible, adjust your child’s environment to remove the cause. If Trudy started twitching soon after you changed daycare providers, you probably should reevaluate your choice of substitute caregivers. If your six-year-old sucks her thumb while watching TV after school, perhaps you should take her for a quiet walk instead.

3. To Confront or Not to Confront Nervous Habits in Children?

Is it a biggie (Does it physically or socially harm the child?) or a smallie that is best ignored? Calling your child’s attention to a smallie may intensify the habit or push him into a biggie. If it is a smallie, focus on the conditions that trigger the twitch, and not on the habit itself, so you can prevent the problem from turning into a biggie. If it’s a biggie, involve your child in the habit control. These are your child’s habits, and only he can break them. Discuss the habit with your child. Inquire whether or not it bothers the child, and if so, how.

If you decide the habit should be eliminated, make your child aware of it and involve him in the treatment. Discuss with your child why it’s better to lose the habit and how you and he will be partners in breaking the habit. Offering rewards along the way adds incentive to breaking nervous habits in children.

As little monkeys see, little monkeys do. Examine the habits of the persons of significance in your child’s life. Do you bite your nails, smack your lips, tap your foot? Mrs. Daniels brought Michael in for counseling because of his twitching. In going into the family history, we found that Michael comes from a twitchy family: Uncle Joe twitches, grandmother twitches, and mother twitches. It was always considered no big deal and was played down as simply a family quirk. Since Michael wasn’t bothered by his twitches, nor was he being teased about them, we decided that ignoring them would be the wisest therapy unless they increased to the point of causing Michael social embarrassment.

Nervous habits in children may be a mini relaxer, a time-out, or a temporary distractor from a stressful situation. Search for stress producers in your child’s life and remove as many of them as you can. Expect nervous habits in children to begin or intensify following a move, the absence of a parent, divorce, or any major change in the child’s routine.

An effective way to avoid the pathway that leads to nervous habits in children is to suggest an alternative route; a detour. If a child’s fingers are busy squeezing a ball, he won’t be able to suck his thumb. As soon as your child is in the situation that triggers the habit or he first becomes aware that he is doing it, he immediately, by reflex, clicks into the harmless alternative.

As soon as the nail-biter feels his hands approaching his mouth, he folds his hands and twiddles his thumbs or fingers a marble in his pocket. Or she twists the ring on her finger or makes a hard fist and then releases the tension by shaking out the hand. Practice these alternatives. Drill, drill, drill: Urge to bite, grab marble or ring, repeat, repeat. To help your child remember, give this alternative a name such as “the sub” or “the detour.” Remind him gently and unobtrusively, “Remember your sub.”