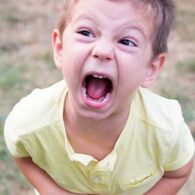 My 2-year-old screams at the top of his lungs whenever he doesn’t get his way. This usually happens when we’re in public. How can I teach him that this isn’t acceptable behavior?

Yelling and screaming peak between the age of 18 months and 2 years. This behavior is not to spite you.  Instead, your toddler is trying out his voice to see the decibels he can reach. Also, the effects of his siren on his audience. Toddlers soon discover how much power they have in their voices. That little 2 ½ foot tall human being can stop a whole supermarket full of adults in their tracks. It seems toddlers reserve their loudest shrieks for the quietest places. As these early shrieks and yells have shock value, causing all those within earshot to stop and pay attention, toddlers whine because it works. Even though these ear-piercing sounds are the usual behavior of pre-verbal toddlers, that doesn’t mean it is acceptable behavior. Here are some tricks we used to stop our toddler’s screaming.

To stop a toddler screaming, model a softer voice to him by whispering, “Give mommy your nice voice.” A silencing technique that worked the best for us was “signing.” As soon as the first shriek hit my ears I would quickly put my index finger over my lips.  In a show and tell gesture, I  signaled Erin to use her nice voice. Because toddlers like to mimic facial gestures, Erin soon learned this sign language to stop her own scream before it took off. Giving toddlers their own signs to stop their own annoying behavior is a valuable self-discipline tool.

If you can’t stop the toddler from screaming, designate an appropriate space for it. One of our toddlers, Mathew, was so amazed at the loudness of his voice. He went through a screaming stage that was tolerable yet bordered on annoying. The best that we could do was teach him to scream in appropriate places. When Mathew first started screaming we took him outside into the yard. We jumped up and down and screamed together as a game. The next time he began screaming in the house we again took him into the yard and repeated the screaming act. After that, whenever he would start to scream, we quickly interjected in a soft voice, “only scream on the grass.” We had planted in his mind, at a stage when toddlers make mental matches of what activity goes where, that screaming and outside go together, and any other relationship doesn’t fit.

Toddlers need to learn that pleasant sounds get pleasant responses. When your child addresses you in his usual unpleasant voice, give a prompt response so that he learns that this is the best voice for quick action. Toddlers need frequent verbal and gestures reminders to get them back on track. As soon as your child starts to scream, besides using the finger-to-mouth quiet gesture quickly get him to change his communication channels by interjecting, “use your nice voice.” After rehearsing this social drama many times, you will be able to stop a screaming toddler by saying, “nice voice, please.”

If a supermarket scream escalates so that your child is over the hill firmly escort him out to the car until the blast is passed. Best to keep your assistant shopper so busy that he doesn’t need to scream. If you are in a check out line and your toddler screams for a piece of candy don’t feel embarrassed at what the other shoppers may think of you as a parent. They have all been there and heard that. Besides, because of all the enticing stuff supermarkets put in the checkout lines, the management deserves this behavior. Quickly finish your shopping and escort your screaming toddler out of the store.

Generally, I am not a fan of the ignore it advise. Ignoring undesirable behavior deprives you of the skills of shaping annoying behaviors into acceptable ones. Also, growing children need to be taught what behaviors are acceptable in what social circumstances and what isn’t. Besides, ignoring screaming doesn’t always work. Children with persistent personalities will simply yell louder. Once your child becomes more fluent and learns that his nicer voice gets nicer responses screaming will be a sound of your parenting past.

The part of a tantrum that bothers parents the most (and causes them to give in or get angry) is screaming. The key is not to take the screaming personally. Take it for what it is – a verbal expression of explosive feelings. Screaming that is given into quickly turns into a tool for manipulation. Nighttime is an especially vulnerable time for parents to feel powerless against screaming (for example, your two-year-old wants to nurse for the third time and you’ve decided to let dad take over). We tell parents they don’t have to protect the child from his own screaming. He is choosing to scream and he can choose to stop. As long as the child is not left to scream alone, he has your support without your capitulation. He’ll figure out how to stop screaming.

For more information on child discipline visit our website and read The Discipline Book: How to Have a Better-Behaved Child From Birth to Age Ten