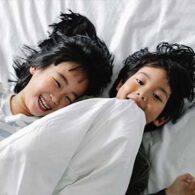 The 5 Stages of Moral Growth of Children Explained

Children go through moral development stages, yet unlike physical growth, moral growth doesn’t happen without some input from parents. To develop into a morally solid person, a child must be given a solid foundation at each stage.

The moral growth of children starts at infancy. An infant does not have the capacity to moralize, other than having a sense of rightness or wrongness as those feelings apply to himself. After being nurtured in the womb for nine months, a baby enters the world, expecting that nurturing will continue. Never having been hungry, baby concludes that hunger is wrong; it hurts. Never having been unattended to, baby finds aloneness to be wrong; it’s scary. Never out of touch, baby knows that unresponsiveness is wrong. Being in-arms, at the breast, and responded to feels right! Baby feels she is the center of the world, and she develops a feeling of rightness that becomes her “norm.”

During this stage of moral growth, children’s sense of “otherness” begins. Toddlers learn that others share their world; others have needs and rights, too. The house he lives in has “rules” that he must learn to live by, which is frustrating. The child does not yet have the ability to judge something as “right” or “wrong.”  He is only directed by what others tell him. This competes with his internal drive to do what he wants. A child doesn’t yet have the ability to realize he hurts someone when he hits. Hitting is “wrong” because parents tell him so or because he gets punished for it. Depending on how parents convey the behavior they expect, the toddler learns obedience to adults is the norm.

A major turning point in moral growth and development in children occurs: the child begins to internalize family values. What’s important to the parents becomes important to him. The six-year-old may say to a friend, “In our family, we do…” These are the child’s norms. Once these norms are incorporated in a child’s self, the child’s behavior can be directed by these inner rules — of course, with frequent reminding and reinforcing from parents.

Later in this stage of moral growth, children begin to understand the Golden Rule concept and consider how what they do affects other people, that others have rights and viewpoints, too, and how to be considerate. Children from three to seven years of age expect wiser people to take charge. They understand the roles of “child” and “adult” and need maturity from the adult. They perceive consequences and can grasp the when-then connection: when I misbehave, then this happens. The connected child behaves well because he has had several years of positive parental direction. The unconnected child may operate from the basis of “Whatever I do is okay as long as I don’t get caught.”

Children begin to question whether parents and teachers are infallible. Perhaps these people in charge don’t know it all. They have the most respect for those adults who are fair and know how to be in charge. Authority is not threatening to the child but necessary for social living. They believe that children should obey their parents. And, school-age children believe that if they break a rule, they should be corrected. This strong sense of “should do” and “should not do” sets some children up to tattle.

The moral growth of children ages seven-to-ten-year-olds has a strong sense of fairness, understands the necessity of rules, and wants to participate in making the rules. They begin to believe that children have opinions too, and they begin to sort out which values profit them most — a sort of “what’s in it for me” stage. Parents can use this sense of fairness and drive for equality to their advantage: “Yes, I’ll drive your friends to the movie if you agree to help me with the housework.” These negotiations make sense to this age child. This also begins the stage where children can internalize religious values, which concepts truly have meaning for them, and which don’t.

These children strive to be popular. They are vulnerable to peer pressure and peer values. As they continue to sort out which values will become part of themselves and which they will discard, they may vacillate and try on different value systems to see which ones fit. This child is more capable of abstract reasoning about moral values and becomes interested in what’s good for society. During this stage of moral growth, children may view parents more as consultants than as powerful authority figures.