Why do kids lie? What to do.

Parents often ask why do kids lie? They will be caught off guard when their sweet child lies to them. Children lie for the same reasons adults do: to be accepted socially, to get attention or status, to hurt someone else, or because they fear the consequences of the truth. But younger children do not understand the concept of truth the way adults do. Let’s get into the world of the child to understand why do kids lie?

One type of childish fantasy is wishful thinking. Witness the five-year-old telling his friend about a trip to Disneyland — where he’s never been. “Why, he’s lying through his teeth,” you think. “What’s wrong with him?” He’s not lying (at least by childhood standards), he’s thinking wishfully — imagining what he wishes had happened. Not only does wishful thinking allow the child the luxury of living in a dream, it impresses his friends and raises his social status. “You really played with Mickey Mouse?” the admiring friends inquire. Children fabricate tall tales for other children, knowing they always have an audience of believers.

If you hear two children spinning yarns, that’s innocent storytelling — not lying. This stage will pass around seven to nine years as imaginative thinking wanes and peers become less gullible. (If it continues past nine, this character trait will not win friends and is probably a sign that there is an underlying problem needing attention.) You can use storytelling as a teachable moment. You overhear the child’s presentation of his make-believe trip to Disneyland, “We went to Disneyland for my birthday…” Don’t label your child a liar. That’s a putdown. Instead, respect his wishful thinking. “You wish you went to Disneyland. That would be fun. Now, tell us what you really did for your birthday.” The child knows you understand and sees you are not angry. He also subtly learns there’s no need to lie. Also, wishful thinking often reveals the wish. “You wish you could go to Disneyland. Maybe I can help that wish come true. Let’s plan a trip…” It’s comforting for a child to know that some dreams do come true.

THE AGE OF TRUTH

Preschoolers usually can’t (or don’t want to) distinguish fact from fiction. To a four- or five-year-old, Snow White and the Seven Dwarfs exist somewhere. Most children don’t begin to understand truth and falsehood until the age of seven – the age of reason. By eight or nine most children have, or should have, a sense of morality. They feel wrong when they don’t tell the truth and right when they do. They understand what “lying” means and can feel “it’s right to tell the truth.”

“I didn’t do it. Toby did it.” Who’s Toby? The child’s imaginary tiger friend who spilled the juice. The preschool child confuses fact and fiction. This is normal. Children often fabricate imaginary characters and enjoy living in their make-believe world. Appreciate your preschooler’s creative thinking and enjoy this imaginative stage while it lasts. Play along with the child’s fantasy. Sometimes children bring imaginary friends along to my office for a check-up. I place an extra chair for the invisible companion and even do a brief pretend exam. We laugh together.

Adults believe that it’s important to be firmly grounded in reality and to know the difference between real and pretend. But these 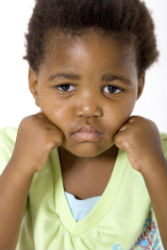 are adult standards. To children, the world is not only what it really is, but what they need it to be. Kids lie because imaginative thinking can actually help a child cope with the real world. Children periodically retreat into their make-believe world, which they can control, as a way of coping with the adult world which they can’t control.

If your child “lies” by making the fictitious friend the scapegoat (“Toby the Tiger did it”), get into your child’s fantasy: “Tell me exactly how Toby broke the glass.” As your child gropes for details to get himself off the hook, he will quickly reveal his part in the incident. In the meantime, ask yourself why he wanted you to think he “didn’t do it.” Do you tend to react to accidents or experiments too harshly?

Respect your child’s creative thinking by telling him that you understand his viewpoint: “It’s easier if you pretend Toby broke the glass. I understand. But now tell me what really happened. I won’t get angry.” Help your child to feel that the truth won’t hurt — there’s no need to fabricate a cover-up because you will love and accept him no matter what he tells you.

Sometimes a recurrent theme in a child’s storytelling reveals what is truly missing in their real world. A mother of a six-year-old consulted me about her child’s “lying.” Her daughter was telling her friends wild tales of fun things that she and daddy were doing: fictitious yarns about trips to toy stores, airplane rides, horseback riding, etc. The truth was she seldom saw her daddy. He traveled a lot, and because he brought his work home with him, was mentally absent while physically present at home. This child built a world of make-believe in self- defense, to protect her growing self from her loss. Remember when kids lie, there is often more behind it than you think.

Often kids lie because they want to please their parents. If they sense that lying will please, but the truth won’t, they often choose to lie and believe that’s the right thing to do. Mother will ask her five-year-old, “Did you pick up your puzzles?” and will get an affirmative answer because the child wants mother to smile and say “thank you.” Later when mother finds the puzzles (or most of them) still spread all over, she’ll need to let her child know that the lie is more displeasing than the disorder. A seven-year-old will say “yes” to the toy question because he doesn’t want to inconvenience himself at the moment and go pick up. Eventually, he’ll realize mom is going to go check. He needs to discover that his tactics won’t work. He is responsible for keeping his toys in order, putting them away every night before bedtime. That’s a family rule.

Kids lie to protect themselves out of fear of punishment. The fear of punishment wipes away any guilt for not telling the truth. Children who are on the receiving end of a lot of corporal punishment often protect themselves by becoming habitual liars. If the child believes that the broken vase will merit a spanking, he reasons it’s less painful to lie. The same thing happens in children who are given major punishments for minor offenses. This inappropriate correction may hinder a child’s development of conscience. Children who fear punishment will say anything to avoid it.

We have helped our children overcome the fear of telling the truth by making this deal: “We promise we will not get angry “no matter what you did, if you tell us the truth, although you will have to face the consequences. However, when we find you have lied to us, the punishment will be severe.” One day someone left Erin’s bike in the driveway. She told me that Matthew had it last. To discover “who did it” I had to free Matt to tell the truth by assuring him I would not get angry if I heard the truth. “Matthew, the deal is I don’t get angry at truth. I get angry at lies.” If a child is afraid of the consequences of telling the truth, he may become a habitual liar. When he can trust you not to fly off the handle, he will be able to open up and tell you honestly what happened. Listen calmly, be fair, and help him correct his behavior. The best way to encourage children not to lie is to support them as they tell the truth.

5. The Child Who Lies a Lot

At some point normal childhood storytelling evolves into purposeful lying, which may become habitual. The child intends to deceive. Many of his social interactions revolve around falsehood rather than truth. The root cause is an angry child who is dissatisfied with his real life and afraid of his parents’ reactions. He doesn’t experience acceptance for normal clumsiness or poor judgment. These kids lie because they have been taught they are bad.

Seven-year-old Charlie’s father disappeared from his life when he was six. To keep from acknowledging painful reality, Charlie created a make-believe world with wonderful father-son stories. Gradually he found that the world of make- believe was more comfortable than the real world. By the age of eight he was lying habitually about other things. Charlie claimed A’s on his tests when he was barely passing and lied to his mother about where he went after school and about where new possessions came from. Lying became a way of life, a protection from his anger and a cover-up for his poor self-image. The cure for Charlie’s lying was to help Charlie accept and learn to cope with his real life. Therapy for Charlie allowed him to accept that his father wasn’t coming back and that he hadn’t caused his father to leave. It wasn’t his fault. His mother learned through support counseling to spend more time with Charlie doing fun activities and listening to him. Charlie joined a soccer team and the coach took a special interest in him. Soon lying was a thing of the past.