Three year old behavior is easier to live with. Three now has the language skills that let two-way communication become real conversation. Three is a more settled person, having spent a whole year refining her language skills. You can take Three shopping and actually enjoy it.

“I’ve told my eighteen-month-old over and over not to pull the cat’s tail.” Sound familiar? Mothers find themselves saying things over and over and over again to their toddlers, and “it’s as though he never heard it.” Many directives don’t sink in; not because your child is being defiant, but because most children under two don’t yet have the cognitive ability to remember and reflect on prior instructions. You just have to keep repeating yourself—that’s how he learns at this age. One day you’ll realize you haven’t warned him about the cat’s tail for a week. Between two and three years children begin to internalize what you say to them. They pay more attention to directions and store them in their memory bank as part of their operating code. When you say “no street” to an eighteen-month-old, he may act like he’s never heard you say that before. When you say the same thing to a three-year-old, he seems to reflect, “oh, yes, I remember.” The ability to make instructions part of himself is a part of three year old behavior that makes discipline easier.

Three year old behavior is less egocentric, and he realizes there are people in the world who are as important as himself. This budding sensitivity in three year old behavior can work to a caregiver’s advantage or disadvantage in discipline. While Two notices her parent’s emotions, Three gets involved with them. An entry from Matthew’s baby journal noted this event; Martha 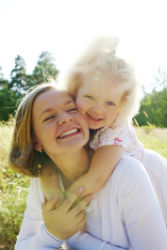 asked three-year-old Matt to pick up his wooden blocks as part of our daily “kids pick-up time.” Matt balked and then was slyly letting his older sister do all the work. Martha told him that she was unhappy with his not obeying, but then realized Matt needed to have time to reconsider his position. She backed off for a few minutes, and Matthew then willingly did his job. As he was picking up his blocks he said, “Do you still love me?” Martha reassured him, “Even when you cry and yell and disobey, I love you.” Matt persisted, “Do you like me?” Martha answered, “Yes, I like you, but I don’t like it when you don’t listen and help. I like it when you make the right choices.” When the job was done, Matthew came over, hugged Martha, and said “I’m sorry, Mommy.” Martha hugged him back and said, “I’m sorry for yelling.” A few minutes later he said, “Are you happy to me?” This is the depth of emotional exchange you can expect three year old behavior. They really want to make you happy. You will find living with children much easier if you give them many opportunities to please.

Three year old behavior is marked by becoming more satisfied with herself or himself. Three begins to praise “self.” One night our three year old Matthew announced, “I turned on the Christmas tree all by myself.” We acknowledged his triumph by exclaiming, “Wow!” He said, “I’m so happy to myself.”

Three is often described as the “absolute mother’s dream” stage, mainly because three year old behavior is more obedient. The no’s of the Two become yeses for Three. “Okay, Mom,” becomes quicker and more willing. While disagreements still happen, you can now breathe easier knowing that you are likely to meet a willing Three rather than a negative Two. While Two thinks no one else’s agenda could possibly be as important as her own, Three considers the needs of others. Expect her to come when asked, put away toys when asked (usually), and generally want to please, though these changes will not come overnight.

Three understands house rules and consequences for breaking them. They begin to internalize parents’ values. You can gradually expand your explanations of what you expect according to your child’s mental maturity. While Two still operates on an association of act and consequences, “I hit, I get put in the time-out chair,” Three can now understand why he shouldn’t ride his tricycle into the street. Three year old behavior will include beginning to think before they act, but don’t count on it all of the time. While they do think about the consequences of their actions, they do not yet have the ability to consider the rightness or wrongness of the action; they just click into what you have taught them—ride the trike into the street and it gets put away in the garage. Discipline for three year old behavior involves conditioning the child to act a certain way rather than teaching him to make moral judgments. (The concept of right and wrong develops around ages six or seven.) Discipline techniques that were marginal for Two’s, work better at three. Parents wonder how much their three-year-old actually understands. As a rule of thumb at all ages, estimate how much your child understands and double it. The out-of-control Three can understand time-out as a time in the “quiet corner” to regain control.

Three year old behavior thrives on choices. Sharing in the selection process makes them feel important, and they are more likely to cooperate. Share your choice-making with Three: “Which dress should Mommy wear, the blue one or the red one?” Children with persistent personalities (“power kids”) need choices. (Be sure you like all the alternatives you offer.) Most kids do best with two choices; more may overwhelm them. Don’t feel you have to be psychologically correct all the time. In some situations you just have to pull rank and give your child a matter-of-fact command.

Three year old behavior is the stage when children spend much of their time immersed in pretend play. They create imaginary scenes for their own personal enjoyment. The ability to live in a make-believe world helps children learn about the real world. Three year old behavior consists of endless role playing: pretending to be animals, mommy and daddy, doctor and patient, truck drivers, teachers and princesses. Share in your child’s imaginative play (“Who will come to your tea party?”). Your child’s pretend play is a wonderful window into what’s going on in her mind.

Try using your child’s imagination to get him to cooperate. Here’s how one mother taught her three year old to brush his teeth; “On Brandon’s toothbrush there is a little picture of Oscar the Grouch, so I become the voice of Oscar the Grouch. I say ‘Is there any trash in your teeth? Let me come in and see.’ He immediately opens his mouth for Oscar to come in and look at his teeth and eat up the trash that’s in there. Then we talk about having clean teeth, and how we don’t want to leave trash in our teeth. Brushing Brandon’s teeth has not become a big issue because I help him cooperate.”

The mind of the preschool child is rich with fantasy. To three year olds Big Bird and Barney are real. They don’t waste energy separating real from pretend; they sit back and enjoy. While parents may feel it’s their disciplinary duty to purge their child’s gullible mind of unreal things, resist this urge. Strike a balance. Let the child enjoy his fantasies. As his thought processes become more sophisticated he will accept that these fictitious characters are only pretend. You don’t have to manipulate his environment in order to maintain the fiction, the way some parents do to keep a child believing in Santa or the Easter Bunny. Just enjoy these games for what they are—pretend. Santa at best is a jolly, benevolent figure, not a punishing one. Everyone enjoys fantasy, and even for adults it’s therapeutic. Use three your old behavior as a barometer of whether his imaginary experiences are helpful or harmful. The same imaginative mind that creates the fantasies also creates fears. We make sure our children know it’s Mommy and Daddy who give them gifts at Christmas. We’ve never agreed with telling children that “Santa Claus” is watching to see if they’re good. Be especially vigilant about cartoons.