To cope with toddler behavior it helps to remember the basic principle of developmental discipline: the drive that babies have to develop is the same one that creates discipline challenges.

Imagine how it must feel to learn to walk! He can see all those tempting delights around the room, and he finds ways to get his hands on many of them. Once the developmental skill of walking appears, children have an intense drive to master it. So toddlers toddle—constantly. And they can toddle into unsafe situations. Walking progresses to running, and climbing a few stairs turns into scaling kitchen counters.

Toddler behavior is influenced by their new found ability to walk and better use their hands. Along with learning how to pick up things, the one-year-old baby develops hand skills to manipulate what he gets. Doors are to be opened, knobs turned, drawers pulled, dangling cords yanked, and waste cans emptied. Everything within walking and grabbing distance is fair game, or so he figures. To the inquisitive adventurer, the whole house is an unexplored continent, and he intends to leave no stone unturned.

3. Out of the Mouths of Babes

The development of language—verbal and body—makes parenting a bit easier. Baby can now begin to tell you what she needs with words. This new skill is a mixed blessing. While baby words are entertaining, they can also be frustrating as the parents struggle to understand just what “da-boo” means. Toddlers like to try on different noises to hear how they sound and how they affect their audience. They screech and squeal, yell and jabber. Sometimes their little baby words are pleasing to your ears, and at other times they are nerve-wracking. Language also gives expression to feelings; a feisty “no” from your formerly agreeable child can raise your eyebrows at this new toddler behavior. 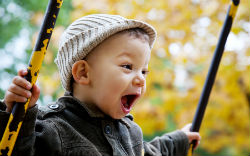 Toddler behavior leaves many parents dumbfounded because toddlers think, but not logically. Just as motor skills take off during the first half of the second year, toward the last half mental skills blossom. The one-year-old plunges impulsively into activities without much thinking. The two-year-old studies her environment, figuring out a course of action in her head before venturing forth with her body. But a baby’s desire to do something often precedes the ability to do it successfully. This developmental quirk drives toddler behavior that gets them into trouble and can send caregivers to the brink. Even though you know that baby hasn’t mastered a skill yet, your explanation won’t stop him from trying. For example, one morning our son Stephen insisted on pouring his own juice. He had the ability to maneuver the cup and pitcher, but lacked the wisdom to know when the cup was full. He did not want us to pour it for him, so we let him stand at the sink and pour water into cups while we poured the juice at the table. After a pouring party at the sink, he accepted my hand on his hand and followed my nudge for when to stop pouring.

During the second year your baby’s temperament will become more apparent. “Bubbly,” “daredevil,” “determined,” “cautious,” and “adventurous” are just a few of the labels used to describe toddler behavior. Children come wired differently, and different kinds of children need different kinds of discipline. Matthew, a relatively cautious toddler, seemed to think out a task carefully before attempting it. If he got himself in too deep he would not protest being rescued. Our two-year-old Lauren came wired with a different program of toddler behavior. She sees an enticing gadget on top of the kitchen counter, and she is willing to risk life and limb to get it. Because of her personality, we don’t often let her out of our sight. Her drive helps her keep going, to get up after falling, to persist after being told “no,” to struggle with words to make her needs known. It also inspires her to climb higher if the cookie jar has been promoted to the top shelf. The parents’ task, in the words of one frazzled toddler behavior manager, is to “keep my child from breaking his neck, and yet encourage him to learn.” Think “age-appropriate behavior” and you’ll be able to give age-appropriate direction.

In the normal course of development the same toddler behavior the child needs to developmentally advance to the next level are the very ones that can get him into trouble. As a child goes from dependence to independence, he will often merit labels like “defiant,” “won’t mind,” “bossy,” “sassy,” and “impulsive.” Some of these behaviors are simply a byproduct of the child’s need to become an independent individual. And the “stubbornness” that keeps your child from “minding” is the same spunk that helps him get up after a fall and try again.

Developing children take two steps forward and one step backward. In each stage of development, they bounce back and forth from equilibrium to disequilibrium. While they’re stepping forward into uncharted territory, finding new friends, trying new things, expect discipline problems due to the anxiety that tags along with experimenting. In each stage, expect the calm to come after the storm. The same child who spent two months in a snit may act like an angel for the next three. This developmental quirk can work to the child’s advantage and yours. Spot which phase of toddler behavior your child is in. If he’s trying to move away and grow up a bit, let out the line. During this phase, your child may seem distant from you; she may even answer back and defy you. Don’t take this personally. This phase of toddler behavior will soon pass. The child is just in the “do it myself” phase and needs some space and coaching (including correcting) from the sidelines.

One day soon, as sure as sunrise follows nightfall, you’ll find your child snuggling next to you on the couch asking for help with tasks and suggesting activities you can do together. You may even wake up one morning and discover your six-year-old nestled next to you in bed. This child is now in a reconnecting phase, a pit stop in the developmental journey when your child needs emotional refueling.

When parents and child are out of harmony, discipline problems multiply. If your child is trying to break away when you are trying to bond, you are likely to overreact to what may be normal toddler behavior patterns of independence. If you are too busy while your child is in the reconnecting phase, you miss a window of opportunity to strengthen your positions as comforter, adviser, authority figure, and disciplinarian.

Projects such as toilet training should not be undertaken during a negative phase.

Discipline problems are likely to occur when a child is making the transition from one developmental stage to another, or during major family changes: a move, a new sibling, a family illness, and so on. I recently counseled a family whose previously sweet child had turned sour. The mother had started a new job, and at the same time the child started a new school. If possible, time major changes in your life for when a child is not going through major changes herself.

9. What is “Normal” may not be Acceptable

“I don’t care what the book says, Bobby and Jimmy fighting is not going to be normal in our home,” said a mother who knew her tolerance. Part of discipline is learning how to live with a child through different developmental stages. A child’s early family experience is like boot camp in preparing for life. A child must learn how to get along with family members in preparation for future social relationships. He needs to be adaptable and learn to adjust his behaviors to a particular family need. Billy is boisterous by temperament. Yet, Billy is expected to play quietly for a few days because mommy is recovering from an illness and has a headache. It is healthy for the child to learn that the sun rises and sets on other people besides himself. Children must learn to adapt to house rules to prepare them to adjust to society’s rules.