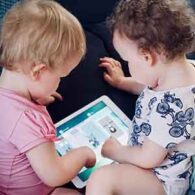 Pediatricians have for decades advised concerned parents to use screen time wisely, especially for young children.  A comprehensive research review of this dilemma appeared in the July 2020 issue of JAMA Pediatrics.  Researchers from the University of Calgary Alberta, Canada, and Alberta Children’s Hospital Research Institute analyzed 42 of the best studies totaling nearly 20,000 kids under twelve years of age. Their main conclusions were:

These screen time findings were consistent with the current American Academy of Pediatric guidelines of “no screen time under the age of 18 months.”

Besides the not-surprising results of these studies, here are two screen time recommendations to keep the mind and body healthy.