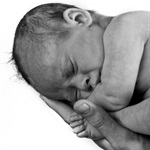 The Effects of Genital Herpes on Newborns Can Be Serious

A newborn baby can contract herpes during passage through an infected birth canal, so it is considered prudent obstetrical medicine to deliver all babies whose mothers have active herpes at the time of delivery via cesarean section. The effects of genital herpes on newborns can be life threatening. If you have herpes, your doctor may do monthly or weekly vaginal cultures throughout your pregnancy to monitor your body’s response to the stress of pregnancy (stress can cause genital herpes to flare up). Women with prior herpes outbreaks actually pass some immunity to their newborns. Women who acquire herpes for the first time during their pregnancy and have active sores at the time of delivery pose the greatest risk of infecting their babies. When you begin labor, your doctor may judge that it is safe for you to deliver vaginally if he or she sees no new herpes sores. If, however, your vaginal cultures continue to show herpes throughout your pregnancy, or you have herpes sores when you begin labor, you will need a surgical delivery.