If only there were a perfect analgesic (meaning painkiller) that would act on only the pain pathways in mother and didn’t cross over the placenta to baby. Unfortunately, complete pain relief without risk is a promise no doctor can deliver. When narcotic analgesics relieve mother’s body of pain, they also affect baby.

An additional concern about narcotics is their effect on the mind, impairing the ability to focus. When combined with natural pain relievers, however, properly used medical pain relievers can get a laboring woman back on track by providing temporary relief, which allows her to rest and recharge. Here is what every mother-to-be should know about choosing and using narcotic pain medication during labor.

How Narcotics Work During Labor 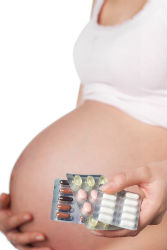 Narcotic analgesics (such as Demerol, morphine, Nubain, Stadol and Fentanyl) reduce pain during childbirth by blocking the pain receptors in the brain. Analgesics affect different persons differently. Not only does the degree of pain relief narcotics provide vary from woman to woman, so do the mental and emotional side effects. Some mothers feel a lot of relief within 20 minutes of the shot, some report only slight relief.

Others report little pain relief, claiming the foggy mind was worse than a hurting body. Some women enjoy the euphoria a narcotic pain medication during labor can cause; a floaty feeling that helps them take their mind off their labor. Other mothers find narcotics compromise their ability to make decisions that benefit their labor progress. If a mother’s mind is too muddled to participate in managing her labor with movement and changes of position, her labor may be prolonged, as will her pain. Narcotics can also make you feel very sleepy, so much so that you sleep between contractions and wake only as each one peaks, unable to focus and stay “on top” of the contractions.

When mother gets an epidural during labor, baby gets the effects of the painkiller as well. Let’s follow a typical narcotic from the time it’s injected into mother to delivery and postpartum, to see how it can affect baby. Within 30 seconds after a narcotic is injected into mother intravenously, it enters baby’s circulatory system at around 70 percent of its concentration in mother’s blood.

Since babies can’t talk and tell us how these drugs make them feel, we can only guess from studying external effects. Electronic fetal monitor tracings of babies whose mothers received narcotic pain medication during labor show heart rate patterns that differ from normal. Babies’ brain wave tracings (electroencephalograms – EEG) change, as do their respiratory movements. Depending on the type, dose, and timing of the pain medications, babies born under the influence of narcotics sometimes show respiratory depression and require temporary assistance to stimulate their breathing.

They may also be a bit groggy as they first enter the world. Bonding may be affected; a drugged mother and a drugged baby don’t make a good first impression on each other. These newborns are also slower at learning how to breastfeed. Narcotics given during labor have been detected in babies’ bloodstreams up to eight weeks after birth.

How to use Narcotics Wisely During your Labor

You may enter the delivery room studied up on drugs, have mustered up all the alternatives to using them, and still conclude, with your birth attendants, that it would be in the best interest of you, your baby, and the progress of your childbirth to get some medication for your labor pains. Here are the safest and most effective ways to use pain medication during labor: