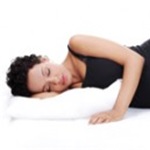 The Challenge of Sleeping While Pregnant

Why You Wake Up So Often

Pregnancy can take up a lot of your energy early on, so you have no choice but to sleep a lot. But as your pregnancy progresses, the very marvels that are taking place inside your body and in your growing baby conspire to make sleeping while pregnant more of a challenge. This just goes with the territory. One way to cope is to understand this “territory.”

Your body is working day and night to grow a baby, and your hormones never rest, so it’s no wonder you have difficulty sleeping while pregnant. As your pregnancy progresses, your sleep patterns become similar to those of a newborn infant. The amount of deep (non-REM) sleep you get decreases, and REM sleep increases. REM stands for “repaid eye movement,” the state of sleep in which you are more aware of your environment and arouse from sleep more easily. Though it’s hard to imagine a physiological purpose for this change, it does prepare you for a realistic fact: motherhood is not a nine-to-five profession.

The pressure from your growing baby pressing against your diaphragm can cause irritating stomach acids to be pushed up into your esophagus, causing gastroesophageal reflux. Lying on your left side sleeping while pregnant in a semi-upright position helps gravity keep stomach acids down, whereas the horizontal position of sleep is a recipe for reflux.

Downward pressure on your bladder, requiring frequent urination, happens in the first trimester; before the uterus is large enough to move up out of the pelvic cavity into the abdominal cavity and away from your bladder. In the third trimester, your bladder will be squeezed for room again by your uterus, now full of a baby, amniotic fluid, and placenta. Another cause of frequent urination is the high level of progesterone necessary in pregnancy. None of these make sleeping while pregnant any easier.

If frequent treks to the bathroom make sleeping while pregnant difficult, avoid beverages containing caffeine (coffee, tea, cola) after 3:00 p.m. Also use the triple-voiding technique to empty your bladder just before retiring. (Grunt three times before you get off the toilet to be sure your bladder is empty. This is a good time to exercise your pelvic muscles too.) If you wake up in the middle of the night needing to urinate, just get up and go. The sooner you do it, the sooner you’ll get back to sleep.

Babies, whether born or unborn, often have their days and nights mixed up. If your enlarging uterus doesn’t wake you up, its occupant will. Whereas your daytime motion lulls the baby to sleep. When sleeping while pregnant, your baby awakens, stretches, and wakes you with all the wonderful movements they’re learning.

You’ve heard the phrase “sleep like a baby.” Well, that’s only partially true. While it’s nice to enjoy that deep, zoned-out sleep that babies periodically have, you may not realize that babies have longer periods of light (REM) sleep throughout the night. Pediatricians theorize that babies have more REM sleep, making them more easily aroused. This means they can wake up more readily to signal a nighttime need.

Leg cramps, skin itching, and swelling breasts are nighttime nuisances that commonly make sleeping while pregnant harder. Especially in the third trimester of pregnancy, leg cramps and “creepy, crawly” sensations in the legs can be particularly annoying. Flex your toes toward your head to ease a cramp – pointing your toes down usually aggravates cramps. Calcium and potassium deficiency can make cramps worse, so eat more fruits and vegetables and limit carbonated drinks, since the phosphoric acid can steal calcium.

With all the changes going on inside your body and your home environment, it’s easy to carry on with daytime worries and the associated high level of stress hormones into precious sleeping while pregnant.

Sleeping while pregnant tends to produce dreams that can be more intense, vivid, disturbing, and bizarre than your non-pregnant dreams. Women we have interviewed report that pregnancy dreams seem more real than regular dreams and that the usual “life worries” themes seem more grossly exaggerated. Pregnancy dreams also occur more frequently than non-pregnancy dreams, and are recalled more easily because a pregnant woman wakes up so frequently, often during a dream, when it’s fresh in her mind:

I dream a lot anyway, but my pregnancy dreams were so realistic! I dreamed I told my husband he could date his ex-girlfriend, and the dream went downhill from there. I dreamed he took her out to dinner on my birthday and eventually ran off with her. I woke up drenched with sweat, shook my husband, and screamed, “How could you do that to me?”

You dream differently sleeping while pregnant because you sleep differently when you’re pregnant. As we’ve said, during pregnancy, especially during the last trimester, you spend a larger percentage of your nap and nighttime sleep in REM, the stage that encourages dreaming and easy awakening. However, pregnancy dreams cannot be blamed entirely on hormones, since many expectant fathers also report having more vivid, even scary, dreams. A baby on the way means big life changes for everyone in the household. Because of these changes, a pregnant woman’s mind is ready for thought and introspection day and night.

I dreamed we left our two-year-old with my parents and forgot to pick her up. I think this dream means I’m scared I will neglect our older child when the new baby comes.

Sleeping while pregnant causes dreams that often reflect a woman’s pressing concerns, which change with the stages of pregnancy. Early in pregnancy, dreams seem to focus on fertility symbols: potted plants, fruit, seeds, water, ocean waves. Toward the middle of pregnancy, dream babies appear in your fantasies, and your dream life may be filled with images of your baby, babies in general, and even tiny animals, such as puppies or kittens. Some women dream that they aren’t pregnant at all and wake up confused and horrified. Many women find the “builder” theme repeated in their dreams, reflecting on the role of Baby Builder. Toward the end of pregnancy, the dreams may become nightmares: your baby is not healthy, you have a problem delivery, someone is stealing your baby. It’s also normal toward the end of pregnancy for dreams on others topics to become more anxious – you might dream about career upsets or problems with your spouse. Most women report that their fearful dreams are baby-related, such as having empty breasts when baby wants to nurse, or doing something terrible as a mother. Dreams of dropping the baby are common:

I kept dreaming about deformed babies. My therapist says this is a common dream for pregnant women and perhaps symbolic of the real threat the baby poses to an established lifestyle and body image.

It is best not to over-analyze your dreams and become anxious about their content. Sleep, especially sleeping while pregnant, distorts and exaggerates realities anyway. If you dream you deliver a deformed baby, it just means that you have the normal, healthy fears a good mother has for her child. Many women find it helpful to write down a negative dream and then rewrite a happier ending.

While dreams do not foretell the future, pregnancy dreams, especially those that have a recurring theme, can reveal hidden anxieties and bring your attention to issues that need to be dealt with. It’s helpful to record the recurring story lines of your dreams to see whether a pattern emerges that might reflect some hidden issue that needs to be addressed. While you don’t need to attach a great deal of meaning or importance to your dreams, some women find that reflecting on them can actually alleviate a lot of their anxiety. Encourage your husband to talk about his dreams as well. He’s making a big adjustment, too.