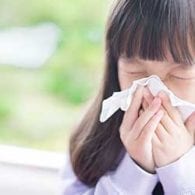 When spring arrives, so do allergies. In fact, the only things that “go around” this time of year are allergies and allergy-related problems. Here is a guide to understanding springtime allergic conditions, how to recognize them, how to treat them with over-the-counter medicines, how to prevent them, and when to seek the advice of your doctor.

The reason for the spike in allergy flare-ups in spring is because all the trees and plants are blooming, and pollen from the flowers get carried by the wind and end up in our nose, eyes, and lungs. Immune cells in these body tissues react to the pollen and release histamine, a chemical that causes fluids to leak out of our bloodstream and into the tissues. In the nose, this results in swelling and mucus production. In the eyes, this causes redness, tearing, burning, and itchiness. In the lungs, this triggers swelling, wheezing, and mucus production. Histamine is also responsible for the itching that occurs in the eyes, nose, and throat.

This is the most common manifestation of allergies. Typical symptoms include:

How do you tell if your child has allergies or just a simple cold?

You notice that your child’s nose has been running for a few days. He begins sneezing, develops an occasional cough, and has to blow his nose frequently. You ask yourself, “Could this be allergies? Or is it just a common cold virus?”

Many parents bring their children to the doctor with this very question. In reality, during the early stages of these symptoms, it doesn’t really matter if this is an allergy or a cold. Neither condition needs an antibiotic and the child doesn’t need to be in the office. See below for how to approach treating allergies.

Now, if you really want to know whether your child is suffering from allergies or just a cold, you are going to have to wait and see if symptoms persist longer than one to three months – this is perhaps the single most important indicator of allergies. Virtually all children go through normal coughs and colds. Some children may have several back-to-back colds during winter that make it seem like they may have allergies. However, before you delve into an all-out effort to prevent your child’s allergies, we suggest you allow at least two or even three months to pass. Mild allergies or a string of colds will usually work themselves out within this time period, thus making allergy intervention unnecessary. You may alleviate your child’s symptoms with over-the-counter allergy medications during this time if necessary. One exception to this three-month rule is for young infants where formula allergy or an allergy to food in mom’s breast milk should be investigated after perhaps one month of symptoms.

How do you treat allergies?

Step 1: No treatment at all.
If your child’s symptoms are mild and do not seem to interfere with his life very much, then you really do not need to give any medication at all.

Step 2: Nasal saline spray.
If the symptoms are mildly troubling, simply squirt this into your child’s nose several times a day to flush out the allergens, and blow the nose periodically.

Step 3: Non-prescription nasal decongestant and/or antihistamine medications.
If the symptoms bother your child enough and are interfering with his daily life, and the saline spray doesn’t seem to be enough, then you can try the following medications:

Because nasal sprays usually take one or two weeks to start working, they shouldn’t be used only one day here and there as this isn’t effective.

For a complete discussion on allergy and cold medications to check out our medicine cabinet.

How can I prevent my child’s allergies in the first place?

Some parents may be reluctant to use medication for a problem that they may be able to prevent from even occurring. Prevention is important, but don’t knock yourself out trying to track down your child’s allergies unless they truly are persistent and bothersome. Usually, a few weeks of treatment is preferable to the painstaking task of allergy prevention.

If, on the other hand, you do wish to jump headfirst into the world of allergy prevention, here is how to do it.

The most common sources of allergies in children (and adults) are:

Now because this is springtime, we are not going to go into details on all the above allergens. Instead, we will focus on springtime seasonal allergies. To read our complete guide to allergies, click here.

If you suspect that your child has seasonal allergies due to pollens, here are the steps you can take to minimize the exposure and symptoms:

Many children come through our office with red, irritated, itchy eyes because they have been kicked out of school because the school nurse is worried about “pink eye” spreading through the school.

Realize that at this time of year, most cases of “pink eye” are actually due to allergies, not infections, and are therefore not contagious.

How do I tell if it’s allergies or infection?

How do I treat allergic conjunctivitis?

Do I need to see the doctor about this?

Follow this link for a complete discussion on all causes of “pink eye” or conjunctivitis.

Although winter is usually considered more of a sinus infection season, many people with nasal allergies experience worsened sinus symptoms during the spring. Some may have a difficult time distinguishing an allergy flare-up from a true sinus infection. Here is how:

Symptoms of a sinus infection:

How do I know when I need antibiotics for a sinus infection?

Your doctor will help you decide this. New guidelines have been developed by the Centers for Disease Control and the American Academy of Pediatrics regarding antibiotic use for sinus infections. It is now recommended to consider NOT using antibiotics for mild sinus infections, or even for early moderate sinus infections. It has been found that these infections often subside on their own with appropriate non-antibiotic therapies (such as frequent nose blowing, nasal saline flushes, decongestants, and steam baths). If an infection persists or becomes severe, then an antibiotic may be warranted.

Follow this topic for a complete discussion on colds, coughs and sinus infections.

While winter is when asthma sufferers may experience asthma attacks during colds or flus, those whose asthma has more of an allergic trigger may suffer flare-ups during the spring allergy season. If your child begins to experience more frequent chest tightness, wheezing, nighttime coughing or decreased exercise tolerance during these months, you should talk to your doctor about using a preventative inhaler and/or allergy medication to make this season easier. Remember, such medications can be stopped, with your doctor’s advice, come summertime if your child is doing well.

If spring is an allergic season for your kids, help minimize their exposure to pollens by following the recommendations for seasonal nasal allergy prevention I talked about above.