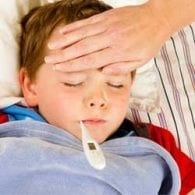 Recent Study on the Flu Virus

An important study reported in the February 2018 issue of Journal of Infectious Diseases of Children surprised many of us pediatricians when researchers found that people infected with the flu virus can spread the virus even when they are not coughing. Researchers analyzed over 200 exhaled breath samples from 142 patients with flu confirmed by nasal swabs during the first three days after the symptoms of their illness began. The flu viral particles were recovered from 39 percent of the breath samples. The take-home message from this study was that persons with confirmed flu should stay home from work, school, and basically not be within breathing distance of other people, when possible. Most persons believe that the flu can only be transmitted by coughing viral particles in the presence of another person.  This study revealed that the flu can be transmitted simply by an infected person breathing the viral particles into the air.