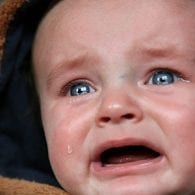 Unidentified food sensitivities or reflux? Determining the reasons for a colicky baby.

Question: Is reflux a real thing or is it unidentifiable food sensitivities? My babe had horrible reflux and I did eliminate diet and now she’s great!

Answer: Back in 1992, with the first edition of The Baby Book, we clarified what was called at that time “colic confusion”. There was even a saying: “Colic is a five-letter word meaning the doctor doesn’t know why my baby hurts.” Instead of the label “colicky baby,” we called it “the hurting baby,” which motivates the parents and the doctor to keep searching for the reason why the baby hurts. We found that the two medical causes of the hurting baby were reflux (also called gastroesophageal reflux disease) and food sensitivities, mainly to wheat and dairy in mom’s diet.

Clues That it is Reflux

When we see a baby with several of these signs, we encourage parents to start this diagnostic and treatment regimen:

The good news is that both reflux and food sensitivities tend to lessen by 6 months of age when the intestines are more mature and baby is more upright. If it persists, the doctor may suggest an antacid medication for a short time.