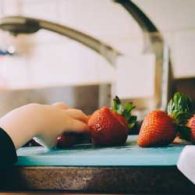 Get Your Picky Eater to Eat Vegetables and Healthier Foods

How do I get my picky eater to try new foods and expand her meal selection?

Early on in our parenting career we often heard the term “picky eater” from concerned parents of toddlers.  So, we decided to study it, especially since we were facing that challenge with a few of our own toddlers.  Toddlers are often labeled picky eaters because their gut is made that way.  Tiny toddlers have tiny tummies, about the size of their fist.  Next time you put a heaping bowl of pasta in front of your picky eater, compare it with the size of her fist, and you’ll know why she doesn’t “clean her plate.”

“Balanced Week” Rather Than Balanced Meal

A toddler’s eating habits are as erratic as their mood swings.  Your child may eat well one day and seem to eat very little the next.   She may love fresh vegetables one day and refuse them the next.  Yet, if you journaled everything she ate for a week, you’d be surprised to find that it’s more balanced than you think.  So, shoot for a balanced week instead of a balanced meal.

With toddler number six, Matthew, we finally mastered the art of feeding the picky eater.  At the time we had so many little mouths to feed that we couldn’t hover over him to be sure he “finished his meal.”  This is when we came up with the nibble tray, which works beautifully between two and three years of age.  Around two you will probably have to sit next to her to keep her from spilling the tray, but by three she may be able to nibble on her own.  We would put the nibble tray on Matthew’s tiny table and supervised him as he nibbled throughout the day.  By the end of the day, the tray was empty, his tummy was full, and there were no hassles.

Here’s how to prepare a Sears family-favorite nibble tray.  Take an ice-cube tray or muffin tin and shoot for a rainbow of colors and foods that are most nutrient-dense, packing the most nutrition per calorie.  Reserve three to four compartments for dips, such as guacamole, hummus, yogurt, and a nut butter.  You could also try dips of pureed fruit or cooked vegetables like sweet potatoes.  Toddlers love to dip!

It’s important to make eating not only delicious and nutritious but also fun.    I would give cute names to all the little foods, such as banana “wheels,” tofu or cheese “blocks,” broccoli “trees,” and egg “canoes” (a quarter of a hard-boiled egg).  One of the most nutritious foods to begin early is wild salmon.  Make a puree of wild salmon or tiny chunks of salmon covered with her favorite sauce and add to the nibble tray.  Notice that these foods are all nutrient-dense.

Toddlers love to copy mom and dad.  So, play a game with her such as “cheese on trees.”  Pick up a broccoli “tree” and dip it into the cheese.  Then let her watch as you exaggerate the yum-yum expression on your face.

I want to share with you an experiment Dr. Bill has been doing in his pediatric practice for over three years.  He calls it “sprinkles.”  Since “vegetable-refusal” is a common complaint of infant feeding he encourages parents around baby’s seven-month visit to open up and “sprinkle” a capsule of ground-up powdered veggies, such as kale, chard, broccoli, and more on your fingertip and place it on baby’s tongue.  The brand he uses is Juice Plus™ because it is the one most supported by science.  You could even announce to your toddler as your finger heads towards her mouth, “Here comes your favorite sprinkles!”

You also want to mimic this by placing a little on your own tongue.  Start with a tiny fingertip of the ground veggie powder and every few days increase the amount until you are giving her a whole capsule sometime between age one and two years.  We call this “shaping young tastes.”

We often use our pediatric practice and our family as sort of a home laboratory, and we notice that the children who are started early on the “sprinkle test” often grow up to not only eat more veggies but to crave them.

Besides putting veggies in the nibble tray, you could also disguise them in a morning smoothie.  Make a green smoothie of organic kale, chard, spinach, artichoke, and one of the most nutritious fruits, although it may taste like a veggie, avocado, all of which can easily be disguised by pairing them with her favorite fruits.  Because toddlers are natural grazers, sipping on a delicious smoothie all day and nibbling on the food in the nibble tray is an easy way to let your little “picky eater” decide how much she wants to eat and how often.

Finally, grow your own garden.  Children tend to eat what they grow.  Even a three-year-old is often eager to go pick veggies out of the garden she helped plant.  A great home garden that children love is called a Tower Garden®, appropriately invented at Epcot Center in Disney World.  We love to see our grandkids literally nibble the tomatoes, broccoli, kale, and lettuce off our backyard Tower Garden®.  To learn more about the veggie-rich Juice Plus™ capsules, click here and the Tower Garden® click here.

For additional information and more tips on feeding your picky toddler, click here.