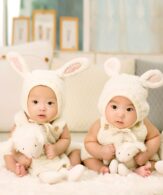 Understanding Nipple Confusion and How to Undo It

There are some basic mechanical differences between how a baby gets milk from a bottle and how it gets milk out of the breast. Giving bottles or pacifiers to young, breastfeeding babies often leads to nipple confusion. Baby tries to use the bottle-feeding technique on the breast and has difficulty latching-on and sucking. This can cause mother and baby frustration. Nipple confusion can even lead to baby refusing the breast. Here’s an explanation.

How Babies Suck on the Breast

To get milk from the breast, baby must coordinate tongue and jaw movements in a sucking motion that’s unique to breastfeeding. When baby latches onto the breast, he opens his mouth wide and draws the very stretchable nipple and areolar tissue far back into his mouth. The tongue holds the breast tissue against the roof of baby’s mouth while forming a trough beneath the nipple and areola. The gums compress the milk sinuses underneath the areola (the pigmented area around the nipple) while the tongue rhythmically “milks” the breast with a wave-like motion from front to back, drawing the milk from the areola and the nipple. Since the nipple is far back in baby’s mouth, it’s not compressed by the gums, so it’s less likely to get sore.

How Babies Suck on a Bottle

Babies suck from a bottle entirely differently. Thanks to gravity, milk flows from a bottle so easily that baby does not have to suck “correctly” to get milk. He doesn’t have to open his mouth as wide or correctly turn out the lips to form a tight seal. The bottle nipple does not need to be far back into the mouth, nor is the milking action of the tongue necessary. Baby can lazily gum the nubbin of the rubber and suck with only his lips. When the milk comes out too fast, baby may thrust his tongue forward and upward to stop the flow from the nipple. Milk keeps on coming during feedings from bottles–whether or not baby sucks–so there are no pauses to rest during bottle-feedings.

Nipple confusion occurs when babies apply the lessons learned from bottle-feeding to nursing at the breast. When you compare the illustration of sucking at an artificial nipple with the illustration of sucking at the breast, you will see that if baby sucks from the breast the same way he does the bottle, the tongue and the gums will traumatize mother’s nipple. Babies who get bottles soon after birth may thrust their tongue upward during sucking and push the breast nipple out of their mouth. They don’t open their mouths wide enough when latching-on, so they suck only the tip of the nipple. They don’t get enough milk, and mother’s nipples get sore. Baby becomes accustomed to the immediate flow of milk that comes from the bottle. At the breast, babies have to suck for a minute or two to stimulate mother’s milk ejection reflex and get the milk flowing.

Is Bottle-Feeding Easier Than Breastfeeding?

Yes, and no. Bottles require less sucking finesse and less effort. However, studies comparing premature infants during bottle-feedings and during breastfeedings have shown that breastfeeding is actually less stressful. Here’s why:

It is easier to prevent nipple confusion than to fix it–though it is a problem that can be solved, should it occur (see below). Breastfed babies should not be given artificial nipples during the first three to four weeks when they are learning and perfecting their breastfeeding skills. Avoiding artificial nipples means avoiding pacifiers as well as bottles. Supplements, if medically necessary, can be given in ways that don’t involve artificial nipples. (See Alternatives to Bottles.)

Will it be more difficult to introduce the bottle later? Many mothers, because they are going back to work or because they eventually plan to get out for a few hours by themselves, want their breastfed babies to accept feedings from bottles. They have heard stories of babies who adamantly refused anything but the breast. Getting baby to accept a bottle at age two or three months may take some patience, but most babies will catch on after a few tries. (Babies can also be fed with alternatives to bottles when mother is gone.) While introducing the bottle at one or two weeks of age may ensure that baby accepts the bottle later, you’re taking a risk. Some babies easily go back and forth between breast and bottle, but many others do not. Don’t jeopardize your breastfeeding relationship when it has barely begun.

When a baby who is getting bottles begins to balk at taking the breast, nipple confusion is probably at the heart of the problem. Here’s how to re-teach a baby what to do at the breast:

Reacquaint baby with the pleasures of breastfeeding.

Breastfeed when baby is calm.

Provide baby with instant gratification at the breast.

Use an eyedropper or feeding syringe to drip milk into baby’s mouth as she latches on to the breast. (Get some help with this one.)

Woo Baby Back to the Breast

When babies are re-introduced to the breast they often act puzzled or uncertain. Be patient. Praise your baby for every tiny step she takes back to breastfeeding. It may take a few days to woo baby back to the breast, but you can do it.

For more suggestions and support about breastfeeding and nipple confusion, get help from a La Leche League Leader or a lactation consultant.