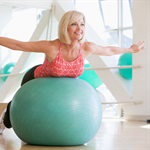 Moving your body moves your bowels, which reduces the risk of colon cancer. Many scientific studies have shown how exercise fights cancer; that people who exercise regularly have a much lower incidence of cancer than people who don’t exercise much. A study that tracked 17,000 Harvard alumni for 25 years showed that the group of men who were highly active (burning at least 2,500 calories in exercise each week, the equivalent of 45 minutes a day) had half the incidences of colon cancer when compared with their sedentary peers. Another study showed that men who had sedentary jobs had a 1.6 higher risk of developing colon cancer than their more active colleagues. Cancer researchers believe that a high-fat diet (especially a diet high in saturated fats) and inactivity accounts for as much as 60 percent of all colorectal cancers in men and 40 percent in women.

The science behind how exercise fights cancer

• Exercise moves waste products through the intestines more quickly, thereby reducing the time that the intestinal walls are exposed to carcinogens.

• Exercise promotes insulin efficiency, which decreases the risk of all diseases, thus accounting for a common theme among cancer researchers:

• “If you have no time for exercise, you better reserve a lot of time for disease.”

• Exercise boosts your immune system by increasing the amounts of lymphocytes, interleukin, neutrophils, and other immune substances circulating in your body. One study showed that exercise more than tripled the circulating level of killer T-cells.

• Exercise also raises the level of high density lipoproteins, the good cholesterol that sweeps excess cholesterol off the walls of your arteries.

• When you build muscle mass through exercise, the muscle itself burns more fat and therefore helps the body maintain its leanness. Once you’re lean it’s easier to stay lean. Increasing your muscle mass actually enables you to consume more calories without increasing your body fat. A study of 13,000 men and women followed for fifteen years by aerobic expert, Dr. Kenneth Cooper, showed that the incidence of all forms of cancer closely correlated with a lack of physical fitness and that the combination of a high-fat diet and inactivity accounted for as much as 60 percent of all colorectal cancers in men and 40 percent in women. Unfit men and women were 300 percent more likely to develop cancer. The study concluded that a half-hour of exercise several days a week can dramatically lower your risk of cancer. In another study of 8,000 men over 21 years, those with the lowest resting heart rate had the lowest risk of colorectal cancer.

A link between diet and cancer is difficult to study because of the many factors that contribute to the development of disease (See Dietary Changes to Lower Cancer Risk). For example, persons with healthier diets tend to have healthier overall lifestyles. Researchers use various statistical methods to factor in their variables when drawing diet-cancer correlations.