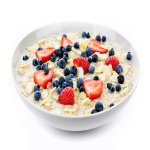 How to Pick Healthy Cereal

Take a stroll down the cereal lane in any supermarket and you’ll be overwhelmed by the overdose of fruity and colorful boxes. The variety, the catchy names, and the fabulous box designs are a tribute to the creativity of American advertising firms. But when choosing and preparing healthy cereal for your family, you’ll need to look past the glitz.

Don’t let the kids decide.
Children are influenced by box designs and TV ads, and care nothing about the nutritional content of cereal. Let them make decisions, but give them healthy cereal choices: pick three cereals that you would select and let them choose one. At least this way they have a choice. Children are more likely to eat cereal they select themselves, but parents must prescreen.

Read the “Nutrition Facts” box on the back or side of the package.
This information is clearer and more accurate than claims on the front of the box. Because these parts of the label follow a standard format, you can use them to make meaningful comparisons between products. Ignore the hype on the front of the box (e.g., the cereal that boasts that it is “low-fat” – nearly all cereals are low-fat). Grains are naturally low in fat, unless you do something unnatural to them, such as add hydrogenated oils in processing. Be wary of some granola cereals, which may contain 4 to 9 grams of fat per serving, especially if it’s hydrogenated.

To help you decide whether a particular product is a healthy cereal that merits a place in your pantry, or is better left on the shelf, consider these six criteria for a healthy cereal:

There are also ingredients nutritious, healthy cereal should not contain. Check the ingredients list for these:

Think about why you are buying cereal in the first place.

Yes, cereal is a favorite family breakfast food, but think about what nutrients cereals are the best source of. The list includes: fiber, protein, folic acid, zinc, iron, and B-vitamins. Most other nutrients can be found just as readily, if not more easily, in other foods. You don’t need to get your daily vitamin C or calcium from your cereal bowl. Choose cereals that are highest in the nutrients cereals do best.

A Tale of Two Cereals

Slow going? One of the most important components of cereals is fiber, which acts like an intestinal broom and sponge, soaking up water and sweeping out waste in the form of softer stools. A high fiber cereal will help prevent constipation.

Look for cereals that contain high-fiber grains, such as barley, buckwheat, millet, oats, rye, and whole wheat. Avoid white rice cereals, since rice is low in fiber. Cereals advertising “high fiber” will often have extra bran (and/or wheat) and may include a grain called psyllium that is very high in fiber. A word of caution: psyllium is powerful. It will cure constipation, but don’t eat too much, too fast, as this will cause gas and bloating. If you’re using psyllium as a supplement (it’s available in health stores), begin with the equivalent of 1/2 tablespoon a day, and gradually work up to one tablespoon, which provides a whopping intestines-cleansing dose of 8 grams of fiber, about a third of the RDA for daily fiber.

For fiber to work, you must take extra fluids, especially water, to help soften the stools. Otherwise the extra fiber turns to sludge in the bowels and actually contributes to constipation.

See flecks in the flakes.

Usually we think of milk and cereal as being married to one another. In one sense, this is an ideal marriage, since the proteins in the milk make up for the few amino acid deficiencies in the grain. Milk and cereal together mean that a person gets a complete protein meal. However, milk can somewhat decrease the absorption of iron from the cereal. Juices high in vitamin C (such as orange, grapefruit, or tangerine) can increase the absorption of iron. If you’re consuming cereal primarily for calories and protein, milk is a better choice than juice. If you’re serving cereal primarily for iron absorption (for example, to a baby who drinks enough milk or formula as a beverage), then juice in the cereal may be a better nutritional choice.

Add your own oats.

If you’re eating oat bran for your heart, rather than looking for the small amounts that may be added to cereals such as granola (which may also contain hydrogenated oils that can raise your cholesterol), buy a package of oat bran and sprinkle it on your choice of cereal. Or, add oat bran to home-baked goodies.

Make your own “multi-whole-grain” cereal.

Packing many grains together into one food will give you the benefit of many different nutrients. Is whole wheat bread deficient in lysine? No problem – add some amaranth. Need more niacin in the bread? Boost it with barley. What’s great about grains is that one plant’s nutritional deficiency is another one’s strength. Multi-grain breads and cereals teach your tongue to enjoy more than just plain old wheat or rice and help you appreciate more nutritional variety. Take some whole wheat, sprinkle in some amaranth (for more protein and fiber), add a touch of quinoa (for iron) and a bit of barley (for fiber), add a few flecks of millet (for folic acid), add a dash of rye (for vitamin E), and you have the makings of a six-grain cereal that has the best that each grain has to offer. But don’t forget to read the label carefully. “Multi grain” is not the same as “whole grain.”

Munching on healthy cereal is a good way to snack, especially for toddlers who don’t like to sit still and eat big meals, but prefer nibbling throughout the day.