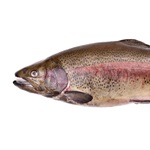 Best Sources of DHA and Omega-3:

Seafood, algae, and especially cold-water fish. Omega-3 fatty acids are nature’s antifreeze. In general, the colder the water, the higher the omega-3 content in the fish oil. Popular sources of DHA are: salmon, sardines, and tuna. Eggs and organ meats have a small amount of DHA in them, but the healthiest source of dietary DHA is seafood. Two 4-ounce servings of omega-3-rich fish per week should yield a sufficient amount of omega-3 fatty acids, especially DHA. Besides fish oils, vegetable oils (primarily flaxseed, soy, and canola) are also rich sources of omega 3 fatty acids, with flaxseed oil being the best. The two F’s, fish and flax, are the top brain-building foods for growing children, and adults.

I shoot for 1,500 milligrams a week. To ensure this amount, I eat at least four 4-ounce servings of fresh or frozen salmon or tuna each week.

For more information about sources of DHA and Omega-3, check out our fish section as well as The Omega-3 Effect, by Dr. Bill and Dr. Jim.