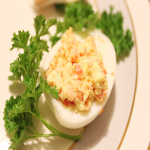 Eggs are an excellent nutrient-dense food that packs six grams of protein, a bit of vitamin B-12, vitamin E, riboflavin, folic acid, calcium, zinc, iron, and essential fatty acids into a mere 75 calories. Second to the lactalbumin protein in human milk, eggs have the highest quality protein of any food. In addition to being good for the body, eggs can be prepared in a variety of tasty ways.

While this may meet the standards of a logical argument, it isn’t altogether true. New insights into the fatty foods/heart disease connection reveal that in people with normal cholesterol metabolism it’s not cholesterol that clogs arteries, it’s foods high in saturated and hydrogenated fats. There is a small proportion of people who are termed “cholesterol sensitive,” because their blood cholesterol levels rise when they eat foods high in cholesterol. In the great majority of the population, the amount of cholesterol in the diet does not affect blood cholesterol, since cholesterol is manufactured in the liver regardless of whether or not you eat it in a food. Saturated fats (and factory-made fats, such as hydrogenated ones) are far greater problems than dietary cholesterol, and compared with some other foods, eggs are not an especially high source of saturated fats. (Egg white is almost pure high-quality protein: so if you are a cholesterol- sensitive person, skip the yolk and eat the white.)

Want more nutritious eggs in your diet? Find out what the hen was fed. In fact, research has proven that better chicken feed results in better eggs. Free-range hens allowed to forage on barnyard plant food produce eggs that are lower in cholesterol than commercially-fed caged hens. Studies comparing eggs from the average hen-laying factory with those of free-range chickens fed diets high in essential fatty acids showed the chicken on a healthier diet produced eggs higher in the heart-healthy omega-3 fatty acids. Studies are under way to produce what are dubbed “designer eggs,” eggs in which the fatty acid profile of the egg yolk has been modified by altering the hen’s diet. In an interesting experiment, giving hens feed rich in flax seed and fish oil (with their omega 3 fatty acids) increased the amount of omega 3 fatty acids in their eggs, producing “omega eggs.” So, even when it comes to chickens, “you are what you eat.” Egg consumers are not used to asking their market managers how the hens were fed that laid their eggs. Yet, if enough consumers start asking the question egg buyers would start putting feed information on the labels. The egg of the future will only be as healthy as the consumer demands.

Bacteria, such as salmonella, seem to appreciate the nutrient quality of the egg inside the shell. They love to multiply in raw eggs. To protect your family from food poisoning, follow these egg-safety tips:

Because eggs are high in cholesterol, they have been lumped together with meat as nutritional no-nos. Wrong! Studies show that for most people who do not already have high cholesterol or who are not particularly sensitive to dietary cholesterol, consuming an egg a day does not significantly elevate serum cholesterol. Most nutrition experts suggest that one egg three times a week can be part of a healthful diet.