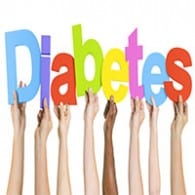 The Onset of Family Diabetes

Does your family suffer from family diabetes? The headline of the March 10, 2016, Los Angeles Times read: “Almost Half in the State are at Risk for Diabetes.”

While we have always thought that those “granola-fed Californians” are a bunch of health food nuts, researchers from UCLA have recently determined that 55 percent of California adults either have diabetes or pre-diabetes. This reminds me of a startling statistic from the Centers for Disease Control in 2000 in which health experts predicted:

Unless American families change the way they eat and live, one-third of American children are destined to become diabetic.

Unfortunately and unhealthfully, this prediction is coming true.

Parents, we have a problem.  Imagine your child having a 33 to 50 percent chance of later becoming diabetic.

Parents, we also have a solution.  Around 90 percent of children with “diabetes” have type II diabetes, the most preventable type.  While type I diabetes is mostly genetic, type II diabetes is nearly completely due to diet and lifestyle.  Kids eat too much junk food and they sit too much.

My remedy is the same that the most trusted “physician,” Dr. Mom, said years ago: “Eat more fruits, vegetables, and seafood, and go outside and play.”

How to Prevent Diabetes

What is the prevent-diabetes diet?  Very simply, the real food diet – eat outside out of the box. Avoid chemically colored, flavored, and sweetened foods.  It’s as simple as that.  Also, white-out your diet: white pasta, white rice, white bread.  And, again, do what Dr. Mom said: “Put more color on your plate.”

As a reminder for parents to keep their children, especially their pre-diabetic children, from going on to develop diabetes, at the checkout counter in my office I have three big soda bottles re-labeled: “Diabetes in a bottle.” They get the point.