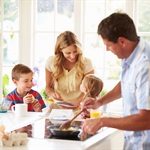 What’s in the Standard American Diet

If you were to list the factors that increase the risk of cancer, heart disease, stroke, intestinal disorders – just about any illness – the standard American diet has them all:

Comparison between SAD and CAD

The striking fact is that cultures that eat the reverse of the standard American diet – low fat, high in complex carbohydrates, plant-based, and high in fiber – have a lower incidence of cancer and coronary artery disease (CAD). What’s even more sad is that countries whose populations can afford to eat the healthiest disease-preventing foods, don’t. The United States has spent more money on cancer research than any country in the world, yet the American diet contributes to the very diseases we are spending money to prevent.