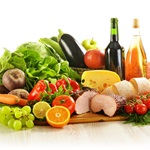 History of the Food Guide Pyramid

In 1992 the U.S. Department of Agriculture (USDA) replaced the popular concept of four food groups with the Food Guide Pyramid. The new pyramid gave greater prominence to plant foods, stressing that grains, fruits, and vegetables are the basis of a healthy diet. Meat and dairy products were placed further up in the pyramid, to show that people should eat less of these foods.

The food guide pyramid is a guide to filling your plate with the right food proportions. It can help parents set food priorities for their family:

Problems with the food guide pyramid

With so many special interest groups to please – beef and dairy farmers, food processors, consumer groups – compromises are inevitable. While the Food Guide Pyramid helps the consumer make wise choices about the quantity of food to eat and their proper space on the plate, it does not address the quality of the food within each group. Fats are all lumped together, whether they’re saturated, hydrogenated, or not. White bread with minimal fiber holds the same place as the more nutritious whole wheat bread. Meat, poultry, fish, legumes, eggs, and nuts end up in the same box, though their effects on your body are vastly different.

The USDA Food Guide Pyramid stacks up the five food groups in their relative proportions. In the Food Guide Wheel, we have improved the food pyramid by making several changes:

Children can follow the same food wheel guidelines as adults, but with smaller servings. Kid- sized servings are one-third to one-half the size of adult servings. For example, kids should eat half a slice of bread instead of one slice, 1/4 cup of vegetables instead of 1/2 cup, 1/2 ounce of cheese instead of 1 ounce, and one egg instead of two eggs.