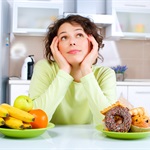 The market is obese with calorie-restriction weight loss diets, the great majority of which reduce more dollars than fat from the obese person. Crash diets rarely work because they try to fool the body, but the body doesn’t buy it. Rapid weight loss diets invariably fail because they are metabolically unsound, often unsafe, and just plain don’t work for these reasons: Crash diets don’t reset the fat point.

When a person suddenly goes on a crash diet and restricts their calories, the body, fearing it’s starving, rebels to protect its set fat point by lowering the body’s metabolism to click into the fat storage rather than fat-burning mode. The body, in its wisdom, interprets the sudden caloric restriction as threatening its nourishment and therefore protects itself by changing its metabolism to resist the sudden change of diet. One way it does this is by increasing the production of the enzyme, lipoprotein lipase (LPL), which promotes the storage and transfer of blood fats into body fats. In essence, your body is working against you. When you suddenly reduce the amount of calories going into it, the body responds by taking those fewer calories and turning them into fat. Then when you start eating “normally” again, the body has already set itself to a lower level of calorie burning, so you gain weight back faster than you took it off. As we will later see, the key is to gradually trick the fat point, so that your body metabolically cooperates rather than fights fat loss.

Crash diets (those that don’t work, don’t last, and are often downright unhealthy) often give you a rapid weight loss in what you see on the scale. For these diets, weight loss does not equate with fat loss, since you are often losing water weight (which you quickly gain back) or muscle weight. Both of these types of weight loss are potentially harmful to your well-being. The reasons for this false weight loss is that during the first week or two on a crash diet the body will first lose protein and water, since the wisdom of the body tells it to hold onto the fat as its last reserve. This loss of protein and water is the reason most people feel lousy during the first week or two on a crash diet.

Another reason why crash diets can be bad for your health is they cut out not only the bad fats, but the good fats, causing the dieter to have a deficiency in essential fatty acids, which can compromise a person’s health. The key to fat control is not only eating less fats, but eating the right fats. In fact, essential fatty acids may also be essential to maintaining proper fat-burning metabolism. Not only are crash diets unhealthy, many crash dieters eat more and regain more fat once they discard the diet – a quirk of nature known as the fast followed by the feast. The body was used to the fat it had and wants it back.

Another reason why crash diets fail is they don’t respect the interplay between insulin, carbohydrates, and fat storage. When you restrict your calories, your blood sugar may drop, causing you to get hungry and binge on carbohydrates, which triggers your insulin, the hormone which also promotes fat storage. In essence, getting hungry can promote fat storage rather than fat-burning in some people.

Ever wonder why it’s so hard to stick to a diet? The reason is your body naturally resists change, even when it’s for the better. It’s like a company that is overloaded with too many employees, inefficient, mismanaged, and downright unhealthy. The shareholders of the company, let’s call it Obese, Inc., vote to downsize. The support network or “employees” of the overweight company resists downsizing because they want to keep their jobs.The body acts in a similar way. In order to lug around twenty pounds of extra fat, the body develops a support network. The heart has to pump more blood, there are extra nerves, the hip bones widen to support the extra poundage around the middle, and extra calories are taken in to support this extra stuff. But the body gets used to this extra stuff and looks for strategies that help it hang on to all of its “employees.”Back to Obese Inc. In the early stages of trimming, the employees are uncomfortable. There are pink slips, layoffs, early retirements, demotions. Yet, management realizes that this initial discomfort is important in order to turn the company around. After a few months the company is running more efficiently, employees are happier, the stockholders are satisfied, wages are higher, and bonuses abound. The company is now trim, efficient, and making a profit. Now the support system fights to keep the company trim, easier to do now that those who had caused the company to become obese in the first place have been weeded out.

Metabolic changes occur in the body when the support system is healthy. The body initially fights the effects of eating less by resetting its metabolic set point lower, so it burns fewer calories. The body is uncomfortable. It may occasionally feel hungry. But after a couple months of resisting the change, the body realizes that it is now feeling better, leaner, trimmer, and is working more efficiently, with more energy. It has a new set point, a new way of working, and now it will fight to stay this way. Foods that it used to crave, it shuns. Habits it used to enjoy, it now perceives as threatening. And it keeps working harder to retain its new self.

Wise management changes a company gradually, so there’s less resistance. This is the best way to approach a new lifestyle, exercise routine, attitude about health and nutrition – the L.E.A.N. program. The body works better when you make wise changes slowly rather than trying to change your lifestyle, exercise habits, attitude and nutrition all at once. It really gets down to “quality” instead of “quantity.”

Go to www.drsearswellnessinstitute.org for more information.

Periodic crash diets in which you lose a lot of weight, gain it back, and then try to lose it again may confuse your body to the extent that it becomes more and more difficult to take pounds off and easier and easier to put them back on. You end up weighing more instead of less. Add exercise to your diet plan and you greatly increase your chances of the pounds staying off.