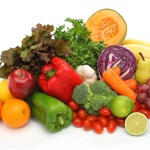 FAQs About Pesticides in Food

Yes. In 1997, Consumer Reports did a study on 100 pounds of produce, some with organic labels and some not, and selected randomly from supermarkets across the country. Twenty-five percent of the organic samples had traces of pesticides compared with 77 percent of the unlabeled samples. While the tests showed that “organic” didn’t necessarily mean “pesticide-free,” organic foods consistently had lower amounts of toxic pesticide residues. In addition, their testers couldn’t detect any difference in taste between organic and unlabeled produce.

Like most government agencies, the U.S. Department of Agriculture (USDA) and the Environmental Protection Agency (EPA) are trying to balance what is good for the economy and what is good for health. Laws require that pesticides in food not exceed certain minimal levels, while acknowledging that pesticides are necessary to produce an “…adequate, wholesome, and economical food supply.” In plain language, the government accepts a bit of a risk as long as a pesticide keeps the price of food down and the supply up. However, there’s always controversy about what should be “minimal allowable levels;” neither scientists nor government officials can agree on what level of risk is acceptable. Logically, pesticides should be treated like drugs, which must be proven safe before being approved for widespread use. With the current laws, pesticides must be proven harmful before they are banned.

Don’t expect the government to make your food safe on its own.

New pesticides are being developed faster than government agencies can monitor them. Although the Government Accounting Agency (GAA), Congress’s watchdog, has gotten after the FDA to clean up the mess, government agencies haven’t been able to stunt the growth of pesticide use. Consumer groups, such as the Natural Resources Defense Counsel (NRDC), try to expose the ways in which these agencies are not doing their jobs, but consumers do not wield the power of the food- industry lobby. The bottom line is that the government really doesn’t know and the food industry won’t tell what pesticides really get into the food supply. And consider this, whoever’s in charge now — in Congress or the various administrative agencies — won’t be around decades from now when the consequences of current pesticide use show up in the cancer rates of the U.S. population.

Understanding more about how the testing is done reveals the magnitude of this problem. The FDA and EPA actually test only a fraction of the pesticides used in food production, and even the results of those tests are of questionable value. Testing is done with animals that are given various amounts of these chemicals and then examined for ill effects. Besides obvious problems, such as death, paralysis, tumors, and growth retardation, the tissues are examined for microscopic evidence of cell damage. Once a level is found that causes no identifiable damage, a fraction of that level is extrapolated to humans as the “maximum acceptable level” – the level of pesticide residue in a food that is legally acceptable.

Yet, what is legal may not be completely safe for the following reasons:

Absolutely. In 1989 the National Resources Defense Council released results of the most comprehensive analysis ever conducted on pesticide residues in foods commonly eaten by children. This study, called Intolerable Risk: Pesticides in Our Children’s Foods, identified 66 potentially carcinogenic pesticides in foods that a child might eat. The researchers in this report estimated that children have four times as much exposure as adults to eight of these carcinogenic pesticides. These are some reasons why kids and pest-killers don’t mix:

What you can do?

The information presented here is not meant to scare you, but to motivate you to take action about a potentially serious problem that affects ourselves, our children, and our grandchildren. Here’s how you can protect your children against pesticides.

Don’t buy poisonous food. Parents are at the top of the food chain. Suppose 100 parents on a given day went into their local supermarket and asked “Where is your organic food section?” It wouldn’t take long before that store had organic produce on the shelf. Grocers purchase what consumers ask for; wholesalers supply what grocers ask for; and farmers grow what wholesalers buy. If you buy it, farmers will grow it. The law of supply and demand starts with you.

Control the top of the food chain when it comes to food prices.

Since price is based on supply and demand, the more pesticide-free food you demand, the greater will be the supply, which will bring prices of organic food down to the level of chemical food.

The government is not going to make food safe for you and your children just because it’s the right thing to do. Parents and consumers must take the initiative. Why? Because your motive is pure: to protect the health of yourselves and your children. Any government motive is laced with residues of trying to please various powerful lobbies- allow a little bit of cancer in return for a little bit of pesticides in the food supply, if this means you have a happier food grower more likely to make campaign contributions to influential representatives in Congress. Put the right spin on it, and most voters don’t know what’s really going on. Of course, the people most at risk, babies and children, don’t even have a vote. To get your views heard, support organizations interested in a safe food supply, such as the Natural Resources Defense Council (NRDC), 40 West 20th Street, New York, NY 10011 (or visit Another way you can influence the food chain is to write to your local congressional representatives and ask them to support laws that ban chemical farming. This will also prompt manufacturers to produce safer pesticides. Farmers will use what manufacturers produce; and eventually the price of organic food will go down and the safety of food will go up. Everyone wins.

Many consumers pay more attention to price than the product, at least when it comes to food. We may be willing to pay a bit more for gas that makes our car run better, clothing that looks, feels, and wears better; or even for shoes that display a designer trademark, yet we quibble about paying a few cents more for a safer apple. Meanwhile, the organic produce salesman is warning: “Pay me now, or pay the doctor later.” Until the food chain changes, expect to pay more for pesticide-free food. At present, only around 2 percent of the food produced by U.S. farms is organic, hardly worth the fuss and expense to the rest of the food industry to make changes in how food is grown.

Buying organic is especially important when it comes to baby foods.

There seems to be an on- going label war on the jars of commercial baby food: “no salt,” “no sugar,” and “no preservatives,” yet an important “no” is missing from the popular brands – no pesticides. Manufacturers claim that they have reduced pesticides far below the legal limit, and that’s commendable, but not enough. Don’t accept what’s legal as being safe for yourself or your children. It makes no sense to eat cheap foods when you’re young and pay high prices for medical problems when you’re older. That’s a bad investment. But isn’t organic food so much more expensive? you may wonder. It depends upon what you mean by expensive. Yes, organic food costs more, primarily because the demand is so much less than for chemically-treated food. Yet in the long run, it’s a great bargain. Suppose someone were to tell you that for a couple bucks extra a day you could lower your child’s risk of getting cancer, losing a few brain cells, and maybe even living to see his own great grandchildren. Think of the extra expense as just a bit more health insurance.

Imported produce may contain more pesticides than domestically grown food and may also contain pesticides that are banned from use in the U.S. American chemical manufacturers export pesticides that can not be used in this country, but the laws don’t protect us if the toxic stuff comes back to U.S. markets in imported produce. Interrupt the “circle of poison.” Require your supermarket to label produce with its country of origin and buy only U.S.- grown food.

If you really want to eat produce you can trust, plant your own garden.

If you and your children eat a variety of foods, you lower the risk of overdosing on foods that are raised with lots of chemicals. This nutritional trick is especially important for children who tend to eat only a few kinds of food over several days. Children who happen to binge on a bad bunch of produce could be exposed to a higher dose of pesticides.

While we urge you to buy organic foods whenever possible, the fear of pesticides should not keep you from serving lots of fruits and vegetables to your family, even if they are non-organic.

We hope that the information about organic food will motivate you to keep the momentum of the healthy food chain going. Putting pesticide-free food into your mouth is one of the best long- term investments you can make in your health.