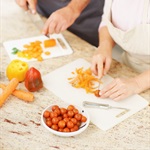 The Recommended Dietary Allowances (RDAs) was originally set up by the National Academy of Sciences during World War II as general guidelines for feeding the country’s soldiers. These recommendations have grown to be guidelines for the general public and were last revised in 1997 and given a new name. RDAs are now known as Daily Values (DVs). Another term you may see is DRVs (Daily Reference Value), which are dietary guidelines for protein, carbohydrates, fat, saturated fat, cholesterol, fiber, sodium, and potassium. Another new term is RDIs (Reference Daily Intake), which are guidelines for essential vitamins and minerals. Daily Values (DVs) are made up of both DRVs and RDIs.

What does DV mean?

The DV estimates the amount of a nutrient needed by an average, healthy person to avoid showing signs of deficiency. The recommendations have built-in safety margins, so in many cases the DV far exceeds the minimum amount of a nutrient necessary to avoid severe health consequences. Most children and adults can thrive on 50 percent of some of the recommendations. The minimum level of vitamin C needed to prevent scurvy, for example, is around 10 milligrams, yet the DV is set at 60 milligrams to allow for individuals with certain health problems, such as cancer and cardiovascular disease, who may require more vitamin C.

The DV specifies the minimum of a nutrient needed to stay healthy. This concept is not to be confused with the amount of nutrients the body actually uses, since we typically absorb much less of a nutrient than is actually in the food. The DV allows for low absorption rates for calcium and iron, for example. Practically speaking, you don’t have to get every milligram of every DV every day, since everyone’s diet varies widely from one day to the next. What you don’t get one day you make up for the next.

The DV numbers represent averages. What you don’t get one day you make up for the next. You as an individual may have a different nutritional need. Realistically, it is not possible for the committees who calculate the DVs to present optimal values for every person and every situation. The DV has been likened to the minimum wage, enough to stay alive, but perhaps not enough for some people, at least, to thrive. The DV numbers are based upon the amount a person needs to keep from getting sick, plus a margin of error. This may be less than the amount needed to achieve optimum health. Of course, optimum health is more difficult to evaluate and quantify than deficiencies are.

Some nutritionists believe that the DV has not kept pace with the latest nutritional research and believe that some of the recommendations may be 30 years out of date. The DV’s have particularly come under fire regarding the recommended level of antioxidant nutrients, such as vitamin C, E, and beta carotene. Some nutritionists believe the DV’s for these health-promoting nutrients should be at least two to five times the current values. On the other hand, the DV’s may be too high for some individuals. They were initially figured for young, active, military males, which means they may be less appropriate for the very young, very old, or for women. A valid, but unavoidable criticism of the concept behind the DV is that it does not respect the biochemical individuality of each person.

The DV’s are based upon measures of physical health, not mental or psychological. Thus, the RDAs do not reflect the suspicion that some emotional and behavioral difficulties of school children could be the result of nutritional deficiencies.

The DV’s, like the Food Guide Pyramid, recommend quantities of nutrients without being specific about the quality. This oversight is particularly glaring in the lack of recommendations for sufficient essential fatty acids in growing children.

Despite their shortcomings, the DV’s are still reasonable for most individuals. Think of the DV’s as a guide, not a goal, and then work out your own nutritional needs and those of your family. As you learn more about nutrition, you can determine your own FDA (family dietary advice), IDA (individual daily averages) or even set up an IRA (individual recommended average). Whatever you call it, be sure to get your ODA (optimal daily average). You can become your own nutritional expert.