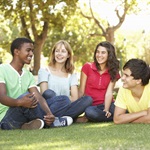 Healthy nutrition — or the lack of it – can affect the three A’s of a teen: athletics, academics, and attitude. During teenage growth spurts, adolescents need extra calories, and they should be nutritious ones. The irony of teen eating habits is at the very stage they need to eat very nutritious foods, they don’t want to. Second to infancy, adolescence is the most critical time for nutritious eating. So it’s safe to say that teens need better nutrition than what a lot of them are getting.

Most teens are overfed, but undernourished. Teens grow a lot, so they need to eat a lot, yet not only do they need more food, they need the right kinds of food.