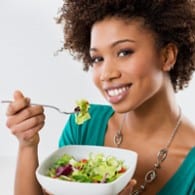 1. What does a “vegetarian diet” mean?

The term “vegetarian” is really a misnomer, since vegetarians eat more than just vegetables. Vegetarian simply means a plant-based diet. There are several kinds of vegetarian diets, defined by what types of foods are consumed.

2. Is the vegetarian diet automatically the healthiest way to eat?

Yes and no. Yes, a vegetarian diet is excellent for good health when you follow the general rules of a nutritionally-balanced diet and be sure you get the nutrients from vegetables that you miss by giving up animal foods. On the other hand, avoiding meat won’t keep you healthy if instead you consume a lot of high- fat, nutrient-empty, junk foods. Vegetarians must also have an otherwise healthy lifestyle to harvest the full benefits of their plant eating. It does little good to eat a tomato and sprout sandwich on whole wheat bread if you also plant yourself on the couch in front of the TV set and smoke cigarettes several hours a day. The vegetarian who piles on the chips soaked in hydrogenated oil, along with high-fat cheese, and artificially-sweetened or highly-sugared beverages would be better off nutritionally if he had less of a sweet tooth, cut down on fat, and indulged in a little animal flesh.

3. What’s so good about a vegetarian diet?

4. Are vegetarians really healthier in the long-run?

Absolutely, positively, yes! Even though nutritionists seem to disagree on many topics, all agree that plant-eaters and fish-eaters tend to live longer and healthier lives than do animal eaters. In every way, the brocolli-munchers tend to be healthier than the beef-eaters:

5. Does it cost more or less to eat vegetarian?

Except for a few delicacies, pound-for-pound plant foods tend to be more of a bargain. Of course, iceberg lettuce, sugary ketchup, and french fries – the typical fast food fare – do not qualify as healthy, vegetarian foods, even though they are cheap.

6. I worry about getting enough iron.

Aren’t vegetarian diets low in iron? Not necessarily. Some vegans we know seem so thin and pale that we want to treat them to a 16-ounce sirloin. Yet, studies have shown that vegetarians who eat a balanced diet don’t seem to have any more iron-deficiency anemia than meat eaters. Even though the iron in plant foods is not as well absorbed as the iron in animal foods, vegetarians usually eat a higher volume of iron-containing foods. Also, many plant foods naturally contain vitamin C, which aids the absorption of the iron. You don’t have to eat red meat to make red blood cells.

The average adult woman needs around 15 milligrams of iron per day. Men and post-menopausal woman need around 10 milligrams. Children and pregnant and lactating women need more.

Coffee and tea lovers beware. Chemicals known as “polyphenols” in coffee and tea can lessen the absorption of iron in plant foods by up to 70 percent. If you’re eating a vegetarian diet with marginal amounts of iron, avoid drinking coffee or tea within an hour-and-a-half of eating iron-rich foods.

Yes. Dairy products are still the easiest available source of calcium, there are plenty of foods that are calcium-rich that don’t come from a cow. Since so many foods are now fortified with calcium, even vegans are likely to get their daily requirement of this important mineral.

8. Can vegetarian diets lead to some nutritional deficiencies?

Only strict vegans are at risk of deficiencies in some nutrients. Lacto-ovo vegetarians and pesco vegetarians (who also eat eggs and dairy products) are unlikely to suffer from nutrient deficiencies, as long as they have a balanced diet, since there are no essential nutrients in meat that are not also found in eggs, dairy, and fish. Yet these are the nutrients at risk: Vitamin B-12 deficiency (which can lead to loss of peripheral nerve function) is of some concern for vegans, since animal foods are still the best source of vitamin B-12. Plant foods do not naturally contain B- 12. Soy foods, such as some forms of tempeh, may contain vitamin B-12, but soy B-12 is not as biologically active as the vitamin B-12 in animal foods. Check the B-12 content of soy products on the package label. Vegans need to consume foods fortified with vitamin B-12, such as tempeh, cereals, or brewer’s yeast, or take B-12 supplements.

Zinc deficiency is another possibility for vegans, yet a deficiency of this mineral can be made up by eating grains, wheatgerm, seeds, soy foods, dairy products, and multi-mineral supplements.

9. Do vegetarians get enough protein?

It’s a nutritional myth that you have to eat muscle to make muscle. Vegetarians who eat fish, dairy products, and/or eggs get plenty of protein, and even a strict vegan can get enough protein by eating enough grains and legumes, which provide a feeling of fullness, along with the necessary quantity and quality of protein. There’s no need to worry about vegetarian children getting enough protein. Each day, for example, preteens can get all the protein they need from an egg, a peanut butter sandwich, a couple glasses of milk, a cup of yogurt, or a black bean burrito.

It used to be thought that different kinds of plant foods had to be eaten together at the same meal in order to get a “complete protein” (meaning all the essential amino acids; see protein terms). This turned being a vegetarian into a nutritional jigsaw puzzle. Which pieces fit together? Nutritionists have now decided that the body is smart enough to combine proteins on its own. The body takes in all the plant proteins consumed in a day and puts the amino acid puzzle together to build the complete proteins that it needs.

10. Do vegetarians get enough fat?

If you eat eggs, dairy products, and/or fish, you get enough fat. Plant-based food is thought to be deficient in fats, but actually the richest sources of the fats that are good for you – unsaturated fats and essential fatty acids – are plant foods, such as nuts, seeds, and oils. There is no essential fatty acid that can only be found in animal-based foods. Yet, strict vegans must guard against deficiency of some fatty acids, especially DHA. Because vegetables provide no pre-formed DHA, some vegans take supplements of DHA, since some people are not able to convert the essential fatty acid ALA in food to DHA in their bodies. Some vegans may have low blood levels of DHA. Seafood is the only food source of pre-formed DHA, which is another reason we believe a seafood plus vegetarian diet is the most healthy for most people.

Tofu can be disguised in sauces, pasta, chili, and stirfrys, because it is close in texture to meat and a rich source of nearly all the nutrients that vegetarian diets need, such as calcium, iron, and zinc (though not vitamin B-12.). Since the calcium content of tofu varies considerably, depending on how it was manufactured, check the package label.

11. As a confirmed meat lover, how can I learn to like vegetable dishes?

Don’t vegetarians eat weird food?You’ll be amazed at the variety of foods – some familiar and some new – that can be a part of a vegetarian diet. Ethnic food is a wonderful source of flavorful, appealing vegetarian dishes. Try Middle Eastern, Greek, or Asian restaurants to learn about tasty vegetarian cooking. Spices accent the flavor and the mixture of vegetables and grains adds fullness and crunchiness that can win over even the most confirmed meat eater. Even Italian restaurants have meatless pasta and other dishes on the menu. There are also many excellent vegetarian cookbooks available at the library or bookstore. You may find that you’ve missed a lot as a meatlover.


If you are trying to wean your family off meat as a main course, do so gradually by preparing dishes that emphasize vegetables and grains, but still include small amounts of beef or poultry. The meat becomes an accent, not the centerpiece of the meal. Or, make meatless dishes that look like they might have meat in them but really don’t, such as:

NUTRITIP: The Spice of Veggie Life

12. Is it safe to feed children a vegetarian diet?

Yes, you can raise a healthy vegetarian. It’s relatively easy if your child’s diet includes eggs, fish, and dairy products. Raising a little vegan requires more planning and nutritional know-how to insure that the child gets enough calcium, vitamin D, iron, vitamin B-12, and some of the other B-vitamins. Yes, children can grow normally on a diet of grains, legumes, and greens, yet it’s a bit risky. A wise parent should seek periodic advice from a nutritionist experienced in vegan diets and practice these precautions:

Maintaining a vegetarian diet can be more challenging during periods in a person’s life when there are extra nutritional needs, such as pregnancy, lactation, childhood, and adolescence. Once the person reaches adulthood, nutritional deficiencies are less of a concern. Even if your children do not remain vegetarians for life, by getting their little bodies accustomed to the taste and feel of a vegetarian diet you have programmed them with a healthy eating pattern that will benefit them throughout life. Vegetarian children, because they get used to the comfortable, after-dinner feeling of a vegetarian meal, tend to shun, or at least don’t overdose on junk meats, such as hot dogs and fast-food burgers. Yet, don’t expect your child to go meatless all his life. Give your children a vegetarian start and, as they grow away from your nest, let them decide what eating pattern they will follow. They may find reasons, such as concern for cruelty to animals, that keep them on the veggie tract. Model your excitement about eating a wide variety of plant-based foods, serve them tastefully, and the rest is up to your child.