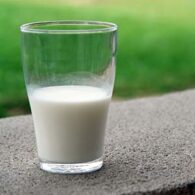 What does goat’s milk give you that cow’s milk doesn’t? In many parts of the world, goat’s milk is preferred to cow’s milk. Even in the United States, goat milk is gaining popularity. Goats eat less and occupy less grazing space than cows, and in some families the backyard goat supplies milk for family needs. Goat’s milk is believed to be more easily digestible and less allergenic than cow’s milk. Does it deserve this reputation? Let’s disassemble goat’s milk, nutrient-by-nutrient, to see how it compares with cow’s milk.

Goat’s milk contains around ten grams of fat per eight ounces compared to 8 to 9 grams in whole cow’s milk, and it’s much easier to find lowfat and non-fat varieties of cow’s milk than it is to purchase lowfat goat’s milk. Unlike cow’s milk, goat’s milk does not contain agglutinin. As a result, the fat globules in goat’s milk do not cluster together, making them easier to digest. Like cow’s milk, goat’s milk is low in essential fatty acids, because goats also have EFA-destroying bacteria in their ruminant stomachs. Yet, goat milk is reported to contain more of the essential fatty acids linoleic and arachnodonic acids, in addition to a higher proportion of short-chain and medium-chain fatty acids. These are easier for intestinal enzymes to digest.

Goat milk protein forms a softer curd (the term given to the protein clumps that are formed by the action of your stomach acid on the protein), which makes the protein more easily and rapidly digestible. Theoretically, this more rapid transit through the stomach could be an advantage to infants and children who regurgitate cow’s milk easily.

Goat’s milk may also have advantages when it comes to allergies. It contains only trace amounts of an allergenic casein protein, alpha-S1, found in cow’s milk. Goat’s milk casein is more similar to human milk, yet cow’s milk and goat’s milk contain similar levels of the other allergenic protein, beta-lactoglobulin. Scientific studies have not found a decreased incidence of allergy with goat’s milk, but here is another situation where mothers’ observations and scientific studies are at odds with one another. Some mothers are certain that their child tolerates goat’s milk better than cow’s milk, and mothers are more sensitive to children’s reactions than scientific studies.

Goat’s milk contains slightly lower levels of lactose (4.1 percent versus 4.7 percent in cow’s milk), which may be a small advantage in lactose-intolerant persons. 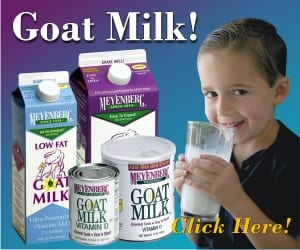 Parents of babies allergic to cow’s milk and other commercial formulas often ask if it’s safe to use goat’s milk as an alternative. In theory, goat’s milk is less allergenic and more easily digestible than cow’s milk, but it should not be used as a substitute for infant formula. Like cow’s milk, it can cause intestinal irritation and anemia. If your baby under one year of age is allergic to cow’s milk-based formulas, try either a soy-based formula or a hypoallergenic formula. If your baby can’t tolerate either soy or hypoallergenic formulas, in consultation with your doctor and/or a pediatric nutritionist see the goat’s milk formula recipe below.

This formula has stood the test of time. One batch contains 715 calories and nineteen calories per ounce, which is essentially the same as cow’s milk formulas. This is sufficient for an infant six to twelve months. A baby on goat’s milk formula should also receive a multi-vitamin with iron supplement prescribed by her doctor. In infants over one year of age, goat’s milk can be readily used instead of cow’s milk. (Be sure to buy goat’s milk that is certified free of antiobiotics and bovine growth hormone (BGH). For more information about goat’s milk call 1-800-891-GOAT.)

Note: Always consult your healthcare provider before feeding any recipes to infants as a formula. Raw (unpasteurized) goat milk may be unsafe for infants, so be sure to use a pasteurized brand.

NOTE: Any time goat milk is the sole source of nutrition, we recommend the feeding of a vitamin supplement. Always consult your healthcare provider before using goat milk formula.