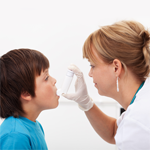 Signs and Symptoms to Watch for when diagnosing Asthma

1. Diagnosing Asthma begins with determine what type it may be.

If your child has asthma, she will generally fit into one of the first three types of asthma as described here. Consider each of the following scenarios and see if you think your child fits one of them:

2. Determine how long the symptoms lasts.

One of the most important aspects of diagnosing asthma is to consider how long the symptoms have been going on. Many children who do not have asthma may have occasional problems with chest tightness, wheezing, nighttime coughing, not tolerating exercise well, or bad colds that cause wheezing.

It is important not to label a child as having asthma until the symptoms have been going on for several months, or on and off for six months.

Remember, that just because a child isn’t labeled with asthma during this time period, doesn’t mean you should ignore it. You should still attempt to determine the cause and seek treatment if necessary. It is simply better to not actually label it as asthma until it really goes on for a while.

3. Visit your doctor to check for wheezing.

It is important for you to visit your doctor several times when you think your child is wheezing or having an asthma attack. This helps the doctor determine if your child is actually wheezing or simply has noisy breathing from chest or nasal congestion. Documenting several wheezing episodes in the doctor’s office can help make the diagnosis of asthma. You may find that what you perceive to be wheezing is really just congestion and may not be related to asthma at all.

If your doctor does detect wheezing on several occasions, he or she can help you determine if your child really does has asthma, and which type of asthma it may be.