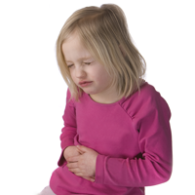 How to Tell if Your Child Is Constipated

Constipation refers to the compactness of the stools and the difficulty passing them, not the frequency of bowel movements. The consistency and number of stools vary according to age and from baby to baby. Newborns have several stools a day that are soft and the consistency of seedy mustard, especially if breastfed. Formula-fed infants usually have fewer, firmer, and darker stools. Once solid food enters the diet, the stools become more formed and less frequent, and some babies may have a bowel movement without difficulty only once every three days, but daily is preferable.

Teach your kids to look in the toilet bowl. Use this handy “poop chart” to start the dialogue so that your children know how to talk with you about their poop shape.

Normally, as the digested food travels down the intestines, water and nutrients are absorbed, and the waste material becomes stools. For a soft stool to form, enough water must remain in the waste material, and the lower intestinal and rectal muscles must contract and relax to move the stool along and out. Malfunction of either of these mechanisms – too little water or poor muscle movement – can cause constipation. Being plugged up with a hard stool for three days can be very uncomfortable. In fact, we did not appreciate this until we strained along with one of our babies, who was constipated for the first two years of his life. As Martha would help him produce a bowel movement, she would proclaim, “I feel like a mid-wife.”

Constipation can become a self-perpetuating problem. Hard stools cause pain on passage; consequently, the child holds on. The longer the stool remains, the harder it becomes – which makes it even more painful to pass. And the longer the large stool stretches the intestines, the weaker their muscle tone becomes. To complicate matters, the passage of a hard stool through a narrow rectum often tears the rectal wall (called a rectal fissure), accounting for the streaks of blood. This painful tear prompts baby even more not to want to have a bowel movement.

Consider these causes of constipation in your infant:

How do I treat constipation?

The following is Dr. Sears’ plan for treating constipation:

Not drinking enough fluids is also a subtle contributor to problems with constipation, especially in the very young and very old. The colon is your body’s fluid regulator. If you’re not drinking enough, your colon steals water from the waste material and gives it to the body, causing the stools to be water-deprived or hard. People eating high-fiber diets actually increase their risk of constipation if they don’t drink extra water along with fiber-rich foods, since fiber needs water to do its intestinal sweeping job. More fluids in your diet put more fluids in your bowels, lessening constipation.

Fiber softens the stools by drawing water into them, making them bulkier and easier to pass. Fiber foods for older babies are bran cereals, graham crackers, whole-grain bread and crackers, and high-fiber vegetables such as peas, broccoli, and beans. (For a fiber-rich diet, see fiber foods.) Supplementing is a good way to increase your child’s fiber intake without causing additional gas or bloating. We recommend Sunfiber or Regular Girl, which blends invisibly into your child’s favorite foods – including cereals, yogurt, juice, and pancakes – without changing the texture, taste, or aroma. Your child won’t even have to know it’s in there!

Exercise improves digestion and speeds the passage of food through the intestines. A moving body gets the bowels moving, too.

Ease the Passage of Stools

Your infant may need a little outside help with a well-timed suppository. As they are going through a phase of learning how to have a bowel movement, many babies in their early months’ grunt and draw up their legs to push out a stool. But the straining baby may appreciate a little outside help with a well-timed, well-placed glycerin suppository. Available without prescription at your pharmacy, these look like tiny rocket ships.

If your baby is straining, insert one as far into the rectum as you can and hold baby’s buttocks together for a few minutes to dissolve the glycerin. As soon as you insert the glycerin suppository, wiggle it a bit, which stimulates the tense rectal muscles to relax and eases the passage of the hard stools. These are especially helpful to lubricate the rectum if baby has a rectal tear or bleeding. Don’t use it for more than a few days without your doctor’s advice.

When using a laxative, try the most natural first. Begin with diluted prune juice (with pulp), a tablespoon or two for the six-month-old and as much as eight ounces for the toddler. Try strained prunes or make a prune puree (stew your own or buy commercial), either straight or disguised (mixed with a favorite food), or spread it on a high-fiber cracker. Apricots and the four P’s – prunes, pears, plums, and peaches – usually exert a laxative effect. If these seem insufficient, here are other ideas to try:

Flax oil is a favorite. A healthy alternative to mineral oil is flax oil, which not only has laxative properties but is a valuable source of omega 3 fats as well. (Although you may hear that mineral oil is a good oil to relieve constipation because it is a mixture of hydrocarbons dried from petroleum products, I have never been convinced of its safety. And, unlike flax oil, it certainly has no nutritional benefits.) Unlike mineral oil, which slides through the intestines, possibly taking vitamins with it, flax oil is a nutrient that facilitates the absorption of the vitamins. Dosage of flax oil:
Infants: one teaspoon a day
Toddlers: two teaspoons a day
Children and adults: one tablespoon a day

Flaxseed meal (ground flax seeds) is an even a better laxative than flax oil since it contains fiber. They look similar to finely ground bran flakes and mix well with soupy cereal, or even better, added to a high-fiber smoothie. Dosage of flaxseed meal:

Toddlers: one tablespoon a day

See Dr. Sears’ School-Ade recipe which also doubles as Stool-Ade. An easy way to get lots of fiber and laxative foods into your child is by making a stool-softening smoothie

Malt-supex (a malt-barley extract) or Metamucil (psyllium powder), may soften your child’s stools. Liquid glycerin (Babylax) may be gently inserted by dropping it into baby’s rectum, which often stimulates a bowel movement.Besides glycerin suppositories, try glycerin suppositories that also include a laxative ingredient. These may be used periodically if the constipation is severe and resistant to the above simpler measures. Baby Fleet may be tried if your toddler is miserably constipated and nothing else is working. It is available without a prescription, and directions are on the package insert.

Constipation in Infants Under One-Year-Old

In addition to the above general tips for preventing and treating constipation at all ages, try these infant-specific tips:

The Bath and Bowel Movement Technique

Here is a Sears’ family trick that helped us ease the passage of stools in several of our constipated babies. Although it’s messy, it works. Immerse your baby in a warm bath so that the water is around chest-high. When your baby is relaxed in the bath, massage baby’s abdomen, and get ready for the mudslide.

Before rushing to attribute your baby’s constipation to the iron in the formula, you may be interested to know that controlled studies performed by the late Dr. Frank Oski, Professor and Chairman of the Department of Pediatrics at John Hopkins Medical School, showed that iron-fortified formulas do not cause constipation any more than formulas without iron.

On the other hand, scientific research and mothers’ first-hand observations sometimes clash. Even in our pediatric practice, a mother occasionally tells us she’s absolutely certain that iron causes constipation. Yet, your baby does need an iron-fortified formula. Low-iron formulas simply don’t provide adequate amounts of iron, resulting in anemia, between the ages of six to twelve months.

If you’re certain an iron-fortified formula contributes to constipation, use all the treatments recommended. If baby is still constipated, give him a low-iron formula for two months.  Then, once your baby’s intestines are more mature and his toleration increases, you can switch back to a fortified formula.

Toddler Holds on to Bowel Movements

Constipation is one of the most uncomfortable and perplexing problems in young children. The presence of a lot of stool in the large intestine signals an urge to defecate. The child either responds to this signal or chooses to ignore it if he is too busy playing. Unlike the urge to urinate, which a child usually cannot control for long, he can choose to ignore his signal to defecate. The longer he ignores it, the more the fluid in the retained stool is absorbed, and the harder the stools become. It then hurts to go to the bathroom, causing the child to hold onto his stools even longer, and the vicious cycle begins – he holds onto his stools longer and longer and becomes more and more constipated.

Try the following with your child:

The intestinal muscles may be somewhat weakened if your child has been constipated for a long time. A month of stool softening may be needed to correct this problem. Try Dr. Sears’ ten-step plan for treating constipation as listed above.