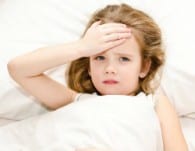 Strep throat is an infection of the throat caused by a type of bacteria known as group A streptococcus. There are many types of streptococcus bacteria, but this one in particular causes strep throat in children. It is the most common bacterial infection of the throat, and is seen most often in children five to fifteen years of age. It is much less common in preschool and younger children.

Kids get strep through person-to-person contact, usually through saliva or nasal secretions. The germs can spread easily in areas where there is close contact, such as in households and classrooms. Even being exposed to tiny droplets of moisture that are released from the breathing passages upon sneezing or coughing can easily spread strep throat in children. Shaking hands with an infected person is another common way strep is spread.

It can sometimes be difficult to differentiate strep throat from other infections of the throat. Most sore throats are caused by viral infections and do not respond to antibiotics. Only your pediatrician can say definitively if your child has strep. Any or all of the following symptoms can appear in strep throat in children:

Symptoms begin two to five days after exposure, a shorter incubation than most germs, and often have a very rapid onset, with fever commonly being the first symptom. As you can see from the long list of symptoms, diagnosing strep throat in children can sometimes be difficult. And given the range in severity the symptoms can have, some kids might have very mild or almost no symptoms at all while others will have severe symptoms, which makes diagnosis that much harder.

If you suspect strep throat, or if your child has been in close contact with another child diagnosed with strep throat, see the doctor right away. Until your child is seen by a doctor, you should keep her away from other children as much as possible. Your pediatrician will take a history and examine your child’s throat. Sometimes the appearance is “obvious strep.” A test, known as a rapid strep test, can be done in the office; the doctor takes a throat swab and tests the sample. This takes approximately five minutes and is around 95 percent accurate in diagnosing strep. However, in some cases the rapid strep test will miss true cases of strep throat in children. A negative rapid strep test should be followed by a throat culture. This involves taking another throat swab and placing the contents of the swab on a special culture that will grow strep bacteria if present. This test takes forty-eight hours to complete and is considered the most accurate. A negative throat culture can almost completely rule out strep as the cause of your child’s symptoms.

As more and more bugs become resistant to drugs, occasionally strep throat in children does not respond to the usual milder antibiotics. If your child has not improved within two to three days, contact your pediatrician.

It is very important to complete the whole course of antibiotics. If treatment is stopped too soon, even if your child is feeling better, strep throat can return.

In addition to taking the antibiotics properly, the following can help strep heal:

Avoid acidic beverages when your child has strep throat. These include orange juice, lemonade, grapefruit juice, and others that can worsen the throat irritation.

Do not send your child back to school if she is still running a fever or is still contagious. Schools have different policies as to whether they let children back twenty-four or forty-eight hours after beginning treatment for strep throat. Talk to your school administrator about your school’s policy. Remember to start probiotics with the course of antibiotics.

The following are complications that can occur if strep throat in children goes untreated.

Rarely, a throat infection will spread into the surrounding neck tissues and cause a large, infectious swelling in the neck called a peritonsillar abscess. A large mass will be evident on the side of the neck, and the child may have trouble swallowing or even breathing. This requires immediate evaluation in the doctor’s office or an emergency room and intravenous (IV) antibiotic therapy.

Very rarely the strep bacteria will enter the bloodstream and travel to the heart, where it adheres to one of the heart valves. The bacteria can form a small mass of infection on the valve, which interferes with heart function. Symptoms include chest pain and shortness of breath, along with persistent fevers. Anyone with these signs with a known strep infection should go to an emergency room right away. Treatment involves aggressive IV antibiotic therapy.

This fancy word simply means inflammation of the kidneys. This isn’t an actual strep infection in the kidneys. Rather, it occurs when the immune system creates antibodies to attack the strep, but the antibodies inadvertently attack the kidneys as well, causing them to temporarily stop working Blood in the urine (either red or cola colored) is a sign of this complication and hospitalization may be required.

This isn’t actually a complication of strep throat in children. It is simply an allergic-type reaction to the bacteria, resulting in a red, pimply, rough-feeling rash throughout the body. Scarlet fever is really no more dangerous than basic strep throat, although a child may feel more ill. There is no treatment for this rash, other than antibiotic treatment for the infection,

Teaching good hygiene practices is important in preventing strep throat in children. Frequent hand washing is a good idea, especially during times when there are known strep throat outbreaks at school. Tell your children to cover their mouths when coughing or sneezing and wash their hands afterward. If your child has strep, keep her eating utensils and toothbrush separate from everyone else’s.

If your children seem to be passing strep throat around more frequently, one or more of them might be carriers of strep throat. A carrier harbors strep bacteria in his or her throat but does not have symptoms. Carriers are capable of passing strep to others. Treating carriers with antibiotics can eradicate the bacteria from their throats and help break this cycle of re-infection. Occasionally, children who get repeated strep infections year after year might need to have their tonsils removed.

If your child gets strep throat, buy a new toothbrush and have her start using it two days after starting the antibiotics. If the same toothbrush is used, bacteria are still present on the bristles and can re-infect your child after the round of antibiotics is completed.