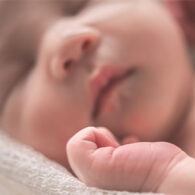 The most plausible explanation for SIDS, in most babies, is a defect in cardiorespiratory control and arousability during sleep. Also, research suggests that some infants at risk for SIDS have less-organized physiological control mechanisms. So, any parenting style that can enhance the development of a baby’s physiological control systems and increase the mother’s awareness of subtle changes in her baby’s physiology, would lower the risk of SIDS. Attachment parenting does this.

New thinking is that some SIDS babies may not have been as physiologically normal as they appeared to be before they died. Findings of higher heart rates and less adaptable heartrate variability in babies at risk for SIDS suggests these infants are less able to adjust their physiology to changing biological conditions. Also, several studies of high-risk infants and babies who died of SIDS suggests that some of these babies had temperaments and behavioral qualities that lessened their ability to protest life-threatening circumstances. Summing up this complicated and shaky research that attempts to correlate infant temperament and SIDS, it seems that in some infants the drive to survive is weak. Some infants are physiologically disadvantaged to protect themselves from SIDS.

A baby who spends a lot of time in mother’s arms, at mother’s breasts, and in mother’s bed becomes more physiologically organized. Therefore, I believe a baby whose overall physiology is more organized has a lower risk of succumbing to SIDS. Pure speculation, researchers would claim! Read on. Over a period of fifteen years, I gathered hundreds of articles on attachment research — studies that conclude: the closer the infant and mother are, the better the baby’s physiology works, especially during the early months when infants are at the highest risk of SIDS. What a pity that most of this useful research lies buried in obscure journals or shared at scientific meetings. Little is translated into practical information to help new parents develop a style of infant care that could reduce the risk of SIDS.

Circulating throughout the bloodstream of every person, even tiny babies is an adrenal hormone called “cortisol”. Produced by the adrenal glands, this hormone helps major systems of the body function normally. The body needs just the right amount of cortisol at the right times. Too much or too little, and the body is not in tune. Think of it like an engine trying to run with the wrong mix of gasoline and air. Adrenal hormones are also known as stress hormones. Levels rise quickly to help a person react to a threat. Although stress hormones are needed in times of danger, if they remain too high for too long, the body becomes overstressed. Therefore, certain systems, such as the immune system, can’t function as well. Experiments on both human infants and infant experimental animals show fascinating results about attachment research.

If, as we have seen, an in-arms baby cries less and is less anxious, and therefore consumes less energy, I conclude that the infant has more “free time” to divert that energy that would have been wasted worrying and fussing into thriving. To thrive means more than just growing bigger; it means an infant grows to her fullest potential, physically, intellectually, and physiologically.

Attachment-parented babies feed more frequently. This interaction improves growth and overall behavioral organization. One of the oldest recipes for the failure to thrive baby is “take your baby to bed and nurse”.  As previously discussed, attachment promotes growth hormones and enzymes that enhance brain growth in experimental animals. The growth hormone is secreted primarily through sleep. Endocrinologists have discovered that human infants deprived of sufficient attachment have lower growth hormones and fail to thrive. This is also known as psychosocial deprivation.

From these studies can we infer that attachment-parented babies have higher levels of growth-promoting hormones? Someday, I predict, research will confirm what I have long suspected: attachment-parented infants have higher levels of substances that enhance their overall physiological well-being and boost a baby’s self-protective abilities as well. So, it seems that mother, by attachment parenting, could act as a regulator of her infant’s physiology, especially during the “developmental dip,” the crucial 2-4 months when an infant is physiologically disadvantaged and at the highest risk of SIDS.

If attachment parenting puts an infant at a physiological advantage to survive the vulnerable period for SIDS, does that imply a baby who receives a more distant style of parenting is at a physiological disadvantage? I believe it does. During my 50+ years as a pediatrician, I have cared for infants called failure to thrive babies. These are infants who aren’t developing to their physical and psychological potential. And, often unintentionally, this condition can be due to poor quality of mother-infant attachment. For the past 50 years, pediatric textbooks have documented cases of “failure to thrive” secondary to poor attachment. Simply put, a baby who feels right, grows right; but an infant who receives less attachment than he needs to thrive feels psychologically unright, and this feeling translates into being physiologically unright.

3. Attachment parenting makes you an expert on your baby.

Besides doing good things for babies, attachment parenting helps mothers too. One of the pieces of advice I give new parents during their first well-baby checkup is: “You don’t have to become an expert on parenting, but you must become an expert on your baby because no one else will.” While it is true that many babies dying of SIDS give no warning signs that their last breath is imminent, some babies do give clues that something is not quite right. Attachment parenting can also boost your sensitivity, helping you monitor your baby appropriately.

Studies have shown that improving mothering skills can lower SIDS rates. The Sheffield, England, study showed that high-risk families who received special parenting-skill education had a SIDS rate of 3.2 per thousand compared with 10.6 per thousand who received no special attention. While this extra education did not specifically mention “attachment parenting” the mother’s were encouraged to breastfeed, and it seems that the closer the mothers got to their babies the more they were able to recognize subtle signs of illness and respond intuitively with a level of care that improved their baby’s well-being.

Attachment parenting is especially valuable for babies born prematurely. By breastfeeding, sleeping with her baby, and wearing her baby, mother provides a backup system for baby’s immaturity. Little things mean a lot for infants at risk for SIDS. Attachment parenting makes you more likely to pick up on subtle changes in your baby, and because you know so much about him, you know when and how you need to intervene. You know where and in what position baby sleeps best, how to heat baby’s room when to seek medical attention, even when to clean out his stuffy nose. You are able to spot changes — for the better and for the worse.

The self-training of an attached mother reminds me very much of how the U.S. Department of Treasury trains people to spot counterfeit money. The spotters spend a long time learning what real money is like. They get a feel for real money. As a result, as soon as a counterfeit piece comes along, it triggers a “not right” alarm inside them, and they spot it. (See and )

4. There is a mutual giving in attachment parenting that can be lifesaving.

Mother acts as a regulator of her infant’s physiology, and her infant helps her develop a keen sensitivity. True, the infant is a remarkably sturdy little person. A baby is able to adjust and grow in a wide variety of parenting situations. But perhaps some need extra help.

Is it possible that SIDS in some babies could be a disease of physiological disorganization? Could attachment parenting help to counteract this disorganization by decreasing stress and providing an environment that makes up for the baby’s inability to regulate himself? Could attachment parenting aid in the maturation of the respiratory control system so that an infant is able to survive threats to his breathing? These are unanswered, perhaps unanswerable questions, yet I believe the available evidence, plus a dose of common sense, makes a good case for the idea that a mother, because of the organizing effect she has on her infant’s physiology, provides protection against SIDS.

Suggesting a relationship between parenting styles and SIDS is bound to draw fire from critics who still think that parenting practices play no role in SIDS, or who do not wish to place so much emphasis on the importance of the mother-baby relationship. I wonder if modern parenting focuses on too much “stuff” and not enough touch, and if modern baby-care practices are a trade-off of increased convenience for an increased risk. It may be considered politically incorrect to speculate on this kind of life-or-death role for a mother; yet for a few infants, it may be physiologically correct.

Over the past twenty years, the importance of the mother to her infant’s well-being has been diluted. It has been weakened by social and economic changes to the extent that the modern view of attachment parenting is that it is nice but not necessary. I challenge that view. As soon as we open our eyes to the fact that mothering matters, the better off — and perhaps safer — babies will be. My wish is that you practice attachment parenting. Not just to prevent SIDS, but because you believe it is best for you and your baby. By receiving the gift of attachment parenting, more babies will thrive — and survive.

The Attachment Parenting Book : A Commonsense Guide to Understanding and Nurturing Your Baby

The Portable Pediatrician: Everything You Need to Know About Your Child’s Health