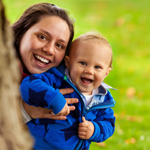 Toddler discipline can be challenging, but is essential.

It can be a trying time while trying to implement toddler discipline.  Teaching right from wrong at such a young age is difficult, but essential.  I have eight tools to help you through this process.

Exploring hands are always looking for things to handle, so give the young explorer word associations to help him sort out what he may touch. Try “yes touch” for safe things; “no touch” for objects off-limits; and “soft touch” for faces and animals. To tame the impulsive grabber, try encouraging “the one finger touch.” other words (e.g., hot touch, owie touch) will come to mind as you discover the world of touch together.

Your toddler has a jar of olives, and you have visions that there will soon be a mess to clean up. You hastily snatch the jar from her clutches, and within a millisecond you have set off a protest tantrum. You’ve saved yourself a mess to clean up on the floor, but now you have an emotional mess to care for.

There is a better way. For a young toddler, make eye contact and divert her attention to something else she’d like. For an older toddler, tell her you’ll help her open the jar so she can have an olive, and point to where you want her to put it. This is simply an exercise in politeness and respect, an “adult-in- charge” approach. Children need adults to communicate and model the behavior adults expect.

3. Get behind the eyes of your toddler

Kids do annoying things – not maliciously, but because they don’t think like adults. You are likely to have a miserable day if you let every kid-created mess bother you. As you enter the kitchen, you see your two-year-old at the sink splashing water all over the floor. You could sink into a “poor me mindset: “oh, no! Now I have to clean up the mess. Why does she do this to me?” Here’s a healthier choice. Instead of first considering your own inconvenience, immediately click into your child’s viewpoint: “This is fun. Look at all the different things you can do with dishes and water.” Remember that what she is doing is developmentally appropriate. She’s exploring and learning. Also realize that because two-year-olds get so engrossed in their activity, she is likely to throw a tantrum if you try to remove her. If you wait a few minutes, she’ll go on to something else; and, besides, water cleans up easily anyway; no big deal. She won’t do this anymore when she’s six. You’ll find yourself smiling. Getting out of yourself and into your child saves mental strain. You don’t have to clean up the mess in your mind along with the water on the floor.

Your one-year- old is toddling toward the lamp cord. Instead of scooping him up and risking a protest tantrum, first get his attention by calling his name or some other cue word that you have learned will stop him in his tracks long enough to distract him. Then, quickly divert him toward a safer alternative. For example, when Lauren was younger, as soon as she would head for mischief we’d call out “Lauren!” Hearing her name took her by surprise and caused her to momentarily forget her objective. once we had her attention, we’d quickly redirect her interests before she’d invested a lot of emotional energy into her original plan.

A baby’s mind is filled with hundreds of word associations. one pattern of association we noted in Matthew’s developmental diary was that when I would say “go” to sixteen-month- old Matthew he would get the babysling and run to the door. When we saw Matthew headed for major mischief we’d say “go.” This cue was enough to motivate his mind and body to change direction. We filed away a list of cue words to use as “redirectors” (“ball,” “cat,” “go,” and so on).

Much of your discipline depends upon your ability to set limits. Humans need limits, and the younger the child the more defined should be the limits. Boundaries provide security for the child whose adventurous spirit leads him to explore, but his inexperience may lead him astray. Consider the classic experiment: After a schoolyard fence was removed, the children, who previously roamed free all over the yard, huddled toward the center of the grounds, reluctant to explore the formerly fenced-in corners. Limits do not really restrict a child but rather protect the curious explorer and his environment, freeing him up to function better within those confines. For example, your toddler doesn’t want to hold your hand as you cross a street or parking lot together. You firmly set a limit: street or parking lot crossing is only done while holding hands. There is no option. We worked hard to achieve the right balance between freedom and constraints for our toddlers. It was not easy. We wanted them to learn about their environment and about themselves, but not at the expense of harming themselves or others. They liked having rules and knowing how to apply them. When a rule needed applying they would often recite the rule to us just to hear it and see if it still applied.

Limit-setting teaches a valuable lesson for life: the world is full of yeses and nos. You decide what behavior you cannot allow and stick to that limit. This will be different for each family and each stage of development. Setting limits introduces a new level of frustration, which every child must experience on the homefront before he is hit with it in the world outside the door. You decide you don’t want your toddler to throw trash around, so you keep the lid on the trash can closed. You keep the door to the pantry closed because you don’t want the shelves mindlessly emptied. You make him stop pulling the dog’s fur and teach him to pat nicely. Scissors and sharp knives are off-limits. You learn to keep them out of reach, and you firmly “distract and substitute” when the inevitable happens. Setting limits helps the whole family. The toddler needs to learn how to share the house with the whole family and parents need to be realistic about their tolerances. As one mother put it, “I know her limits—and mine.”

Some parents fail to set limits because they can’t stand to see their baby frustrated. Healthy doses of frustration help a baby have just the right amount of resistance to keep him reaching for his fullest potential. No frustration, no growth. All frustration, no life. Be sure you model the healthy way to handle frustration. Adults have limits, too. If you know how to deal with your limits, you’ll know how to provide limits for your baby.

Toddlers want someone to set limits. Without limits the world is too scary for them. They intuitively know they need the security that limits bring. When they test the limits they are asking you to show them how dependable you and your limits are.

As each of our babies graduated into toddlerhood, we had to examine our roles as authority figures. We wanted to clearly be in charge of our toddlers so that they would feel safe and secure with someone standing between them and the dangers of the big world, with a place to go for help. We didn’t want to control them like puppets so that we could feel powerful. And contrary to the opinion of some theorists, we did not believe that our toddlers wanted to control us. It was themselves that they wanted to learn to control. We helped them in two ways. First, by letting them know by our tone of voice and our actions that we are mature adults. Secondly, by being available as a safe and secure homebase they can leave and return to at will for comfort and reassurance. In this way, we could help them develop their own inner controls.

We gave our toddlers chances to mess up. They learned from their parent- supported failures. When Stephen insisted on having juice in an open cup with no help from Martha, she let him try it, and he spilled it all over himself. The cold juice running down his body startled him. For the next sip he was willing to be less impulsive; he listened closely to Martha’s advice to tip the cup “slowly.” Because of the mutual trust and sensitivity that we developed during the first year, it was easier for our toddlers to respect us as authority figures. We were able to convey to them what behavior we expected, and their actions often showed that they wanted to please themselves by pleasing us.

When your child reaches one year of age, another title is added to the parenting job description: architect of your child’s environment. By taking on this job you steer the child’s energies toward enjoyable learning experiences and away from harm. You create structure, which does not mean being inflexible, repressive, or domineering. on the contrary, what we mean by “structure” is setting the conditions that encourage desirable behavior to happen. Structure protects and redirects. You free the child to be a child and provide the opportunity to grow and mature. Structure creates a positive environment for the child. By a bit of preplanning you remove most of the “no’s” so that a generally “yes” environment prevails.

Structure changes as the child grows. At all developmental levels restructuring the child’s environment is one of your most valuable discipline strategies. When your infant reaches the grabby stage, you are careful to set your coffee cup out of his reach. When your toddler discovers the toilet, you start keeping the lid latched or the bathroom door closed. The preschooler who fights going to sleep at night gets a relaxing bedtime routine. The nine-year- old struggling to keep up with her homework gets a quiet, enticing place to work in, as well as firm restrictions on school-night television. Structure sets the stage for desirable behaviors to override undesirable ones.