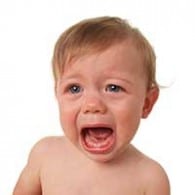 What to Do to Help Your Toddler Handle a Tantrum

Even after you do your best to create an attitude within your child and structure the environment in your home to prevent tantrums, they still occur. Helping toddlers handle tantrums takes patience. Here’s what to do when the little volcano blows at home, in public, or at Grandma’s house:

Feel Your Way Through the Tantrum

Avoid forceful restraint. If holding makes your child furious and escalates the tantrum, loosen your hold or quit holding. Your child needs support, not anger. Forcefully holding onto your child when your child needs to release from you is controlling too much.

The tantrum-throwing child under two will most often need the holding approach. He can’t talk about his problems. Your strong arms in place around him give the message that since he’s out of control you have stepped in to help him hold himself together. You may or may not be heard, but you can speak softly near his ear with reassuring phrases like “Mama’s here. I’ll help you. Show me what you need,” and so on. Don’t coddle and don’t allow his kicks and flails to hurt you. If you can’t contain him and he hurts you, calmly put him down next to you and stay as close as you can without letting him hurt you. When to hold the child and when to just be on stand-by is a tantrum-by-tantrum call.

Time-out the tantrum. If neither ignoring the tantrum nor comforting it seems appropriate, remove the child from the triggering circumstance and call for a time-out. For example, if your child throws a tantrum in the supermarket, calmly pick him up and head for the car.

For tantrums at grandma’s house (often the ones that embarrass parents the most because it is in the presence of their own parents and in-laws that they feel the most scrutinized), it helps if you are able to share your tantrum strategy ahead of time so Grandma knows not to sabotage your approach, and also so she knows you really are in charge of her grandchild and she can just relax and watch you parent. It might be similar to what she did when she was a mom, or it might be very different. But it will help your perspective on things if she says to you something like, “He’s just like his dad. I had lots of days like this, and we both survived.” Then you can both share a laugh and you may get to hear some wisdom from one who’s been there.